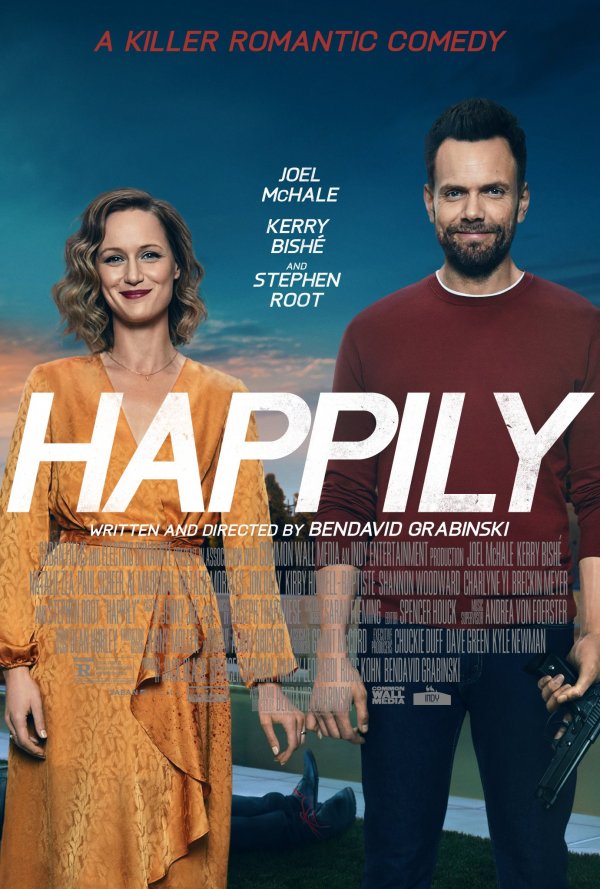 Happily is the brand new dark comedy film starring a strong group of comedians led by Joel McHale. Writer/director BenDavid Grabinski takes us on a humorous look into a ‘perfect’ couple (McHale and Kerry Bishé) who rarely fight and are still crazy about each other to the point that their sexual trists alarm their friends.

Not long after being confronted by one couple about their obsession with one another, a strange man (Stephen Root) visits them threatening to inject a serum that will make them ‘like everyone else’.

Panicking,  Bishé’s character clocks the stranger over the head and the couple bury the body. When an opportunity arises to get out of town with their friends, who have now apologized for their argument, the couple takes it, but now riddled with paranoia, they wonder if one of their friends are behind the strange man’s visit.

Soon, all of their friends’ relationships with their spouses as well as with one another are hanging on by a thread.

Happily is an interesting look into how easily jealousy, trust, and others’ judgments can affect a relationship. “The movie has a lot to say but I also think who you are as a person and what your relationship life has been brings a lot to the table,” BenDavid Grabinski told us in a recent interview.

“If you watch this movie in your early twenties and you haven’t been married or have had a serious relationship, you’ll view the movie one way. But if you’re someone in your forties and on your second marriage, you’re going to have a different take on the movie as well.”

Watch the trailer for Happily!

Happily is Grabinski’s first full length movie and he told StarShine it was the most fun he’s ever had.  “I spent years thinking about this movie and planning and prepping it and making it,” Grabinski says. “It ended up being a lot more exciting because you have this great collaboration with great actors and it felt like a truly creative experience.”

Being a dark comedy, Happily often switches tones from funny to dark and heartfelt. Working with a group of comedic actors, the funny parts were a no brainer, but Grabinski said he wanted an “earnest and sincere” portrayal for Joel McHale’s character, who is known for playing typically douchebag roles.

“I feel like [the actors] really sold all the dramatics through the underlying tension between them.”