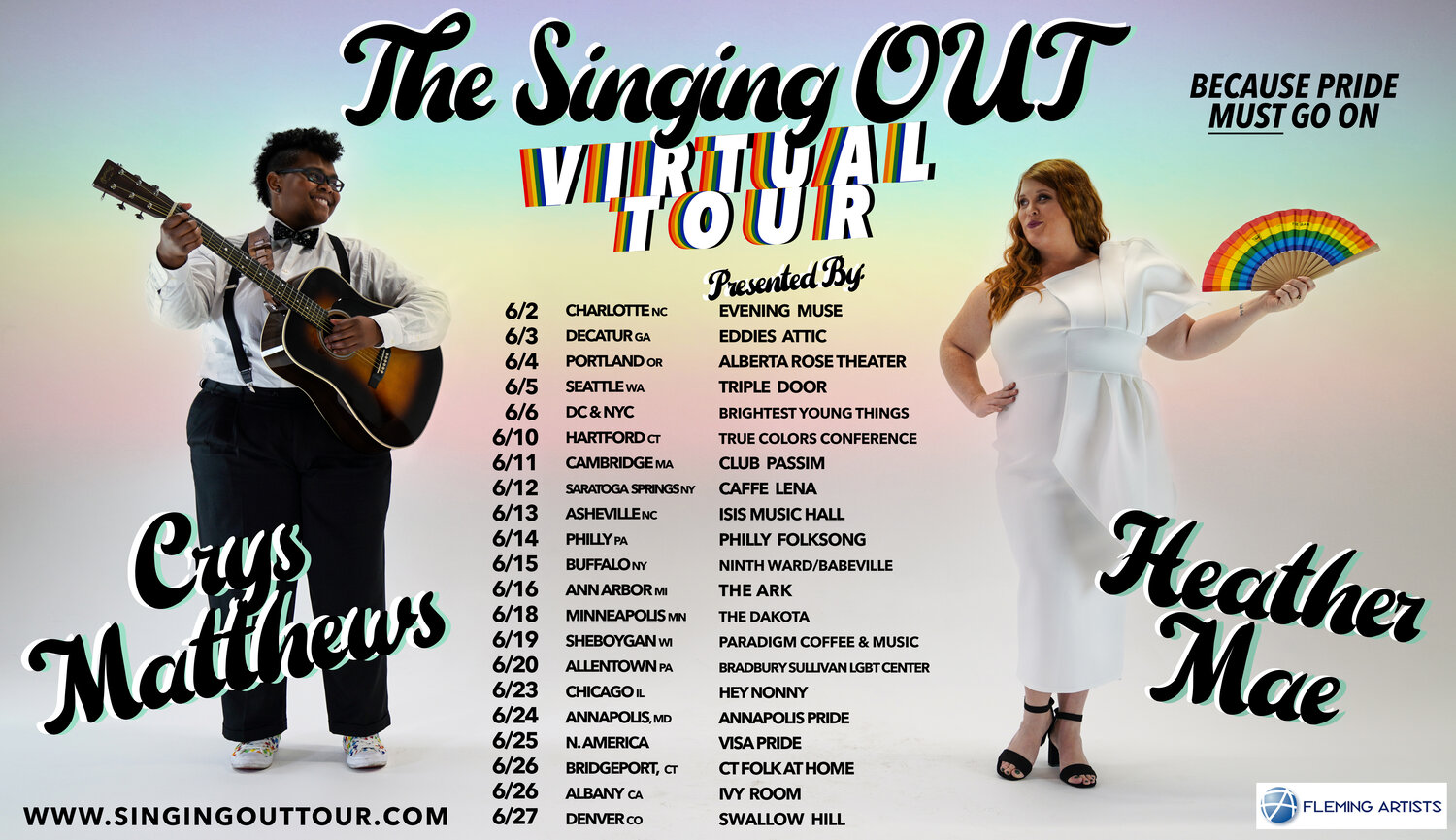 Americana-funk artist Crys Matthews teamed up with pop artist Heather Mae a couple of months ago for the beautiful song “Six Feet Apart”, which we recently discovered.

These two talented queer women have been touring together virtually on the Singing OUT tour.

In honor of PRIDE week, we wanted to spotlight their amazing song collaboration. How did we not hear this song sooner? Give it a listen, add it to your playlists, and show both of these women some love by checking out a show or following them on social media!

Click here to get tickets to the Singing OUT Tour! Hurry, it's almost over!

DC’S Crys Matthews is nothing if not ambitious. In August, she simultaneously released both a new full-length album, The Imagineers and an EP, Battle Hymn For An Army Of Lovers. These collections showcase two sides of Matthews’ dynamic songwriting; The Imagineers is a selection of thoughtful songs about love and life while Battle Hymn For An Army Of Lovers tackles social justice themes. Songs from both projects have already won her recognition and awards. She was one of ten finalists (from a pool of 5,000) in this year’s NewSong Music Competition and, after performing at Lincoln Center on November 30th she was named grand-prize winner. Matthews also won the People Music Network’s Social Just Songs contest at the Northeast Regional Folk Alliance.

Matthews blends Americana, folk, jazz, blues, bluegrass and funk into a bold, complex performance steeped in traditional melodies and punctuated by honest, original lyrics. Having been compared to everyone from Toshi Reagon to Tracy Chapman to Ruthie Foster, Matthews’ eclectic infusion of genres has won her honorable mentions at the 2013 and 2014 Mid-Atlantic Song Contest and extensive radio play from Woman of Substance radio to WTJU-Charlottesville and WMRA-Harrisonburg to KBOO-Portland. Matthews has shared stages with Melissa Ferrick, Chris Pureka and Liz Longley, as well as several regional artists such as Owen Danoff, Eliot Bronson, and Heather Mae.

Equally at home in an acoustic listening room as she is on stage at large music festivals, Matthews has quickly gathered a loyal following on the east coast playing such prestigious venues as The Birchmere, The Hamilton, and Jammin’ Java. Matthews’ festival and showcase roster has included BMI’s Island Hopper Songwriter Festival, the 40th Michigan Womyn’s Music Festival, Folk Alliance International, 30A Songwriters Festival, Northeast Regional Folk Alliance and many more.

A prolific lyricist and composer, Matthews has found inspiration in her surroundings; from driving through the Blue Ridge Mountains to the compelling and heart-breaking love story of Richard and Mildred Loving. Thoughtful, realistic and emotional, Matthews’ songs speak to the voice of our generation and remind us why music indeed soothes the soul.

Unfazed by what a typical pop artist today is “supposed” to look like and how the typical pop artist is “supposed” to sound, Heather Mae, an award-winning songwriter whose evocative vocals and rhythmic piano style call to mind artists like Stevie Nicks and Sara Bareilles, creates intoxicating music that tackles complex topics surrounding mental health, LGBTQ+ issues, self-love, racial injustice, social inequality, and women’s rights. Inspired by her own personal experiences and identities – a queer, plus size woman living with Bipolar Disorder – and those of her multifaceted fans with whom she has forged connections throughout her many years of touring across the United States, Mae crafts powerful lyrics and unforgettable music about life’s moments–from the quietly chaotic to the explosive.

In 2016, after an eight-month period of silence to recover from vocal nodules, Mae made a vow: she would dedicate her career to solely write music that made the world a better place. Her independently-released debut EP I AM ENOUGH, which reached #58 on iTunes Pop Album charts, was her announcement to the world. Mae, who was dubbed “the new queer Adele” by L-Mag,  envelopes her audience with a message of hope.

Her newest project, GLIMMER, is a collection of nine songs supporting one central theme:” Feel To Heal.” Within the grooves of the new album, Mae wrestles with the complexities of existing as a human with mental illness. From her #MeToo-inspired feminist anthem “Warrior,” featuring a choir of 100+ female vocalists, to “You Are My Favorite”, a love song written for her wife inspired by her own wedding vows which will surely be the 2019 wedding soundtrack for LGBTQ+ couples, Mae shows she’s nothing less than a powerhouse. She has examined her struggle with Bipolar Disorder from every angle in order to create her most sonically adventurous set of recordings yet–and to remind us that we aren’t alone.

Video of the Week: Toya Nash – “Now What”