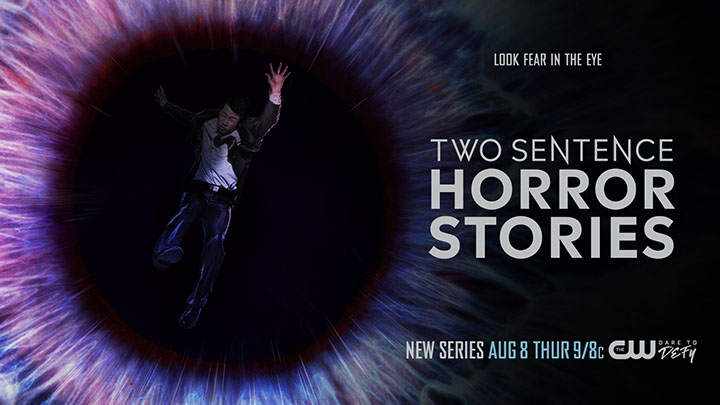 This Thursday, August 29th, a replay of last week’s episode (SCION: Episode 105) will be shown and followed by an all-new episode (TUTORIAL: Episode 106).  Don’t miss out!

If you can’t tune in Thursday, you can catch the series OnDemand on The CW app!

As someone who enjoys horror, but gets easily scared, Two Sentence Horror Stories is the perfect blend of creepy and gasp-inducing reactions without preventing me to lose sleep at night. Still, if you get freaked out easily, I wouldn’t take the chance of watching the series before bed or even alone.

Two Sentence Horror Stories are best served with a snuggle buddy and a bowl of popcorn. Inspired by the viral fan fiction of the same name, the show tells mini horror stories and wraps them up in twenty minutes. Driven by universal primal fears and anxieties that haven’t changed over time, the show aims to remain contemporary and inclusive for a younger diverse generation that’s always connected through technology, which adds its own sense of horror naturally.

With Halloween just two months away, we’re all starting to seek scary, thriller vibes in what we watch! Surprisingly enough, The CW promises to dish up some awesome mystery and intrigue with its fall lineup. With the dark themes of Riverdale heading into its 4th season, Nancy Drew promises to be an edge of your seat nailbiter.

By the time October 31st rolls around, The CW might be where all of your bingeing is done for a fright night… that is if you want to keep your gore, gratuitous sex, and violence to a minimum, and you want tough females like Riverdale‘s Betty or Nancy Drew solving the crime… which we do! Gone are the days where dumb helpless women run around in their bras from men with knives. I commend The CW for their commitment to portraying women with intelligence and cunning.

Two Sentence Horror Stories is no different as you will see in the Tutorial episode.  Check out the synopses below and tune in tomorrow night on The CW at 9pm ET!

SCION: Episode 105 is the story of a gay cancer patient (Uly Schlesinger, Divorce) from a wealthy family who’s receiving treatment in an elite facility his parents are funding. The facility’s promise to make him stronger than ever is not exactly what he thought it would be. (Replay Airdate: 8/29/19, 9pm ET)

TUTORIAL: Episode 106 is about a makeup vlogger (Aleyse Shannon, Charmed) making a video while the camera catches someone sneaking into her room. This episode is my personal favorite — there are twists and turns, along with a bit of humor thrown in at the generation that does everything on social media. (Original Airdate: 8/29/19, 9:30pm ET)

Check out the trailer for Two Sentence Horror Stories: TUTORIAL (episode 106) below!