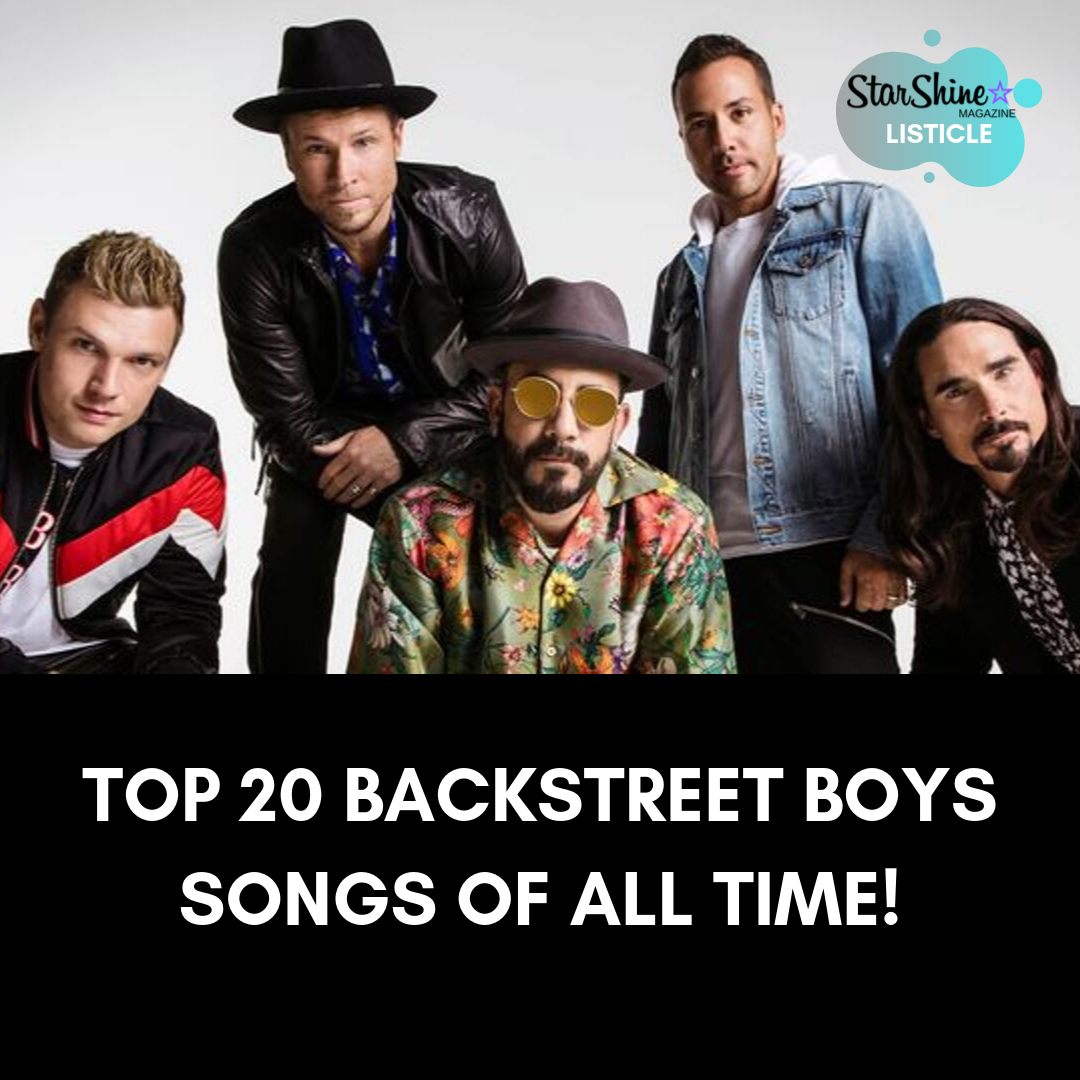 Making this list was no easy feat, especially since none of the fans we polled on social media could narrow down their favorites from the 100+ Backstreet Boys songs out there. Yes, I counted correctly. 9 albums worldwide and on top of that, there are enough bonus tracks and unreleased songs that could probably make up 5 more albums!

If you enjoy the Backstreet Boys, but are not a hardcore fan like I am, do yourself a favor and look up BSB on Spotify, and not just the most popular songs. You’ll find some surprises and new favorites.

Full disclosure: I did take fan votes into consideration when making this list. However, the votes nowhere near equaled the amount of fans BSB has worldwide, so I took some liberties and put in my two cents to round out the list.  Without further adieu, here are the StarShine Magazine #BSBTop20 songs!

*Honorable Mention: “If You Stay” – This song is not available on Spotify sadly, but I wanted to point out that it is one of the most R&B-esque songs the group has done and I miss hearing them perform it live. The song appeared on the soundtrack of “Booty Call” in 1996 if you can find a copy of that anywhere, pop it into your CD player if you still have one, and give it a listen!

This track is an undiscovered gem off of Backstreet Boys‘ 2007 album, Unbreakable — which in my opinion is one of their most underrated albums of all time. It was released at a time in their career when their record label — the now-defunct Jive Records — did nothing to promote them. In my interview with the group in 2008, Nick Carter expressed the band’s frustrations with the label. “There are internal people–and I’m not going to say any names–but there are people that we’ve worked with who feel that we are an [Adult Contemporary] act and feel that’s all that we’re capable of doing. We believe that we are current. All we have to do is get the right tools,” Carter said hopefully. After leaving Jive, the band went on an uphill trajectory that led them to a Grammy nomination in 2019.

Released in 2013 on In A World Like This, “Madeleine” is a sweet, uplifting song trying to tell someone their life is worth living. I loved hearing “Madeleine” live on tour since the group performed it acoustically. Fun fact: I named a character in my novel “Indigo Waters” Madeleine after this song since I wrote it the same summer the album came out.

This was the second single  off the band’s 2005 critically-acclaimed album, Never Gone. The song was a pop-rockish fun song that had an even more awesome video as the group paid homage to 80s hair bands in it.

Lyrically and vocally, “I Still” (Never Gone) spotlights each member of the group nicely. A definite fan favorite!

“Get Another Boyfriend” is about exactly what it sounds like. Kick your man to the curb! The song is on the Black & Blue album and although it wasn’t a single, the band often includes it in their tours.

15. “Show Me The Meaning Of Being Lonely”

This one definitely gets the award for longest song title on the list! It was the third single off their iconic Grammy-nominated hit album, Millennium, and was the last song they worked on with the late producer Denniz Pop.

Now we have the 4th single off Millennium. This one was voted on by the fans to become a single beating out the bass-heavy “Don’t Want You Back”, which I think the band had secretly hoped would win. It’s impossible not to sing along to “The One”, which might be why it was chosen over the more agressive “Don’t Want You Back”.

The falsetto tune is off the band’s latest album DNA and was nominated for a Grammy, which also landed them back in the graces of the younger Top 40 crowd.

This country-pop tune starts out exactly like O-Town‘s “All Or Nothing”. Both songs were released in 2001… so not sure what happened there, but it was a fun guessing game of which song it would be when one of them came on the radio! Many fans selected “Drowning” as a favorite of theirs, which came as a bit of a surprise. While the song doesn’t appear on a full-length album, it was the only new track released on their Chapter One: Greatest Hits album.

Another single off DNA, “Chances” is a great song that constantly gets stuck in my head. My only gripe is the bridge … Why did they make Howie go low and Kevin go high? Was it opposites day in the studio?

BSB’s first big hit in the US has to make the list, even if it’s for the video alone. Every boy band needs at least one video where they’re wet and shirtless … Or just wet in Nick’s case, haha.

The 4th single off the Boys’ first album (in America), “All I Have To Give” was the first song we really got to hear their individual voices on and find out just how well they harmonized together.

The breakout single off of 2005’s Never Gone album, which shocked radio listeners. So many people didn’t even know the edgier pop song was by BSB! Ah, such a great emotional song to scream all of your frustrations into.

The Backstreet Boys’ newest single, aside from their recent collab with Steve Aoki, received a ton of votes! With a great sentiment behind it and an adorable video that peeks into their family’s home lives, I’m not surprised so many fans voted for it.

The lead single off of Black & Blue, “Shape Of My Heart” brought on a maturer sound and a crescendoing chorus we ate up with a spoon.

Admittedly not my favorite BSB song, but arguably their most popular one, “I Want It That Way” is a pop classic that will never go away.

That opening beat, “bow-bow-bow-wow”, and AJ McLean manically laughing gets us hyped every time. Co-written by Brian Littrell as an ode to the fans, “Larger Than Life” will always hold a special place in our hearts.

The sweet ballad off the band’s 1997’s self-titled US debut made us swoon… and made the neighborhood shut their windows as we tried to hold out Brian’s high note with him.

“As Long As You Love Me” was really the turning point for me from “I like this group” to “OMG, can I marry all five of them?” That’s what 14-year-old’s dreams were made of! After all, they told me they didn’t care who I was, where I’m from, or what I did as long as I loved them… Hmm, was that subliminal messaging through music?

The song that makes everyone want to get on the dancefloor and rock their body right, but also provoked the question from American fans, “Why is Backstreet back? Did they go somewhere?” While “Everybody (Backstreet’s Back)” was a single on the group’s second album elsewhere, which made sense that they were “back” … with a new album. For the US, however, we only had the one album, that was re-released with “Everybody (Backstreet’s Back)” on it. Anyway, even if most people didn’t understand it — we all fell in love with it and its Thriller-esque video. Time has proven that as long as there will be music, the Backstreet Boys will be coming back again. (Cheesy, I know… but I tied in the song lyric, so I had to do it!)

Listen to our BSB Top 20 Playlist!