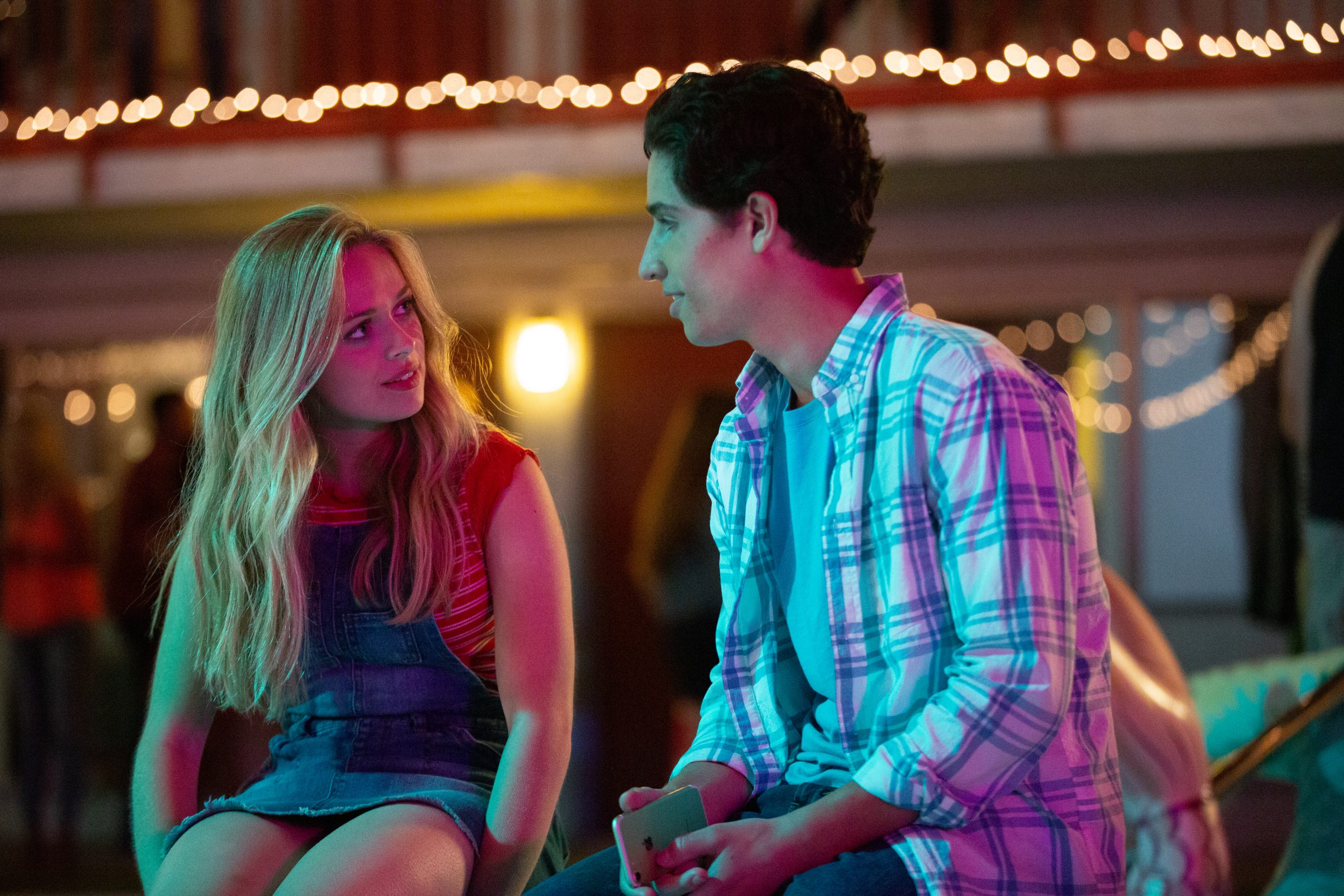 Alyssa Jirrels and Lorenzo Henrie in "This Is The Year"

Wizards of Waverly Place fans rejoiced when it was announced that they could attend a virtual premiere for the feel-good teen film, This Is The Year. Written, produced, and directed by David Henrie (Justin Russo on WOWP), This Is The Year was also executive produced by Selena Gomez who will be part of a Q&A session for the premiere along with the cast, followed by a performance from lovelytheband, who is also featured in the movie.

“It’s very exciting,” says This Is The Year star Lorenzo Henrie (Agents of S.H.I.E.L.D., Fear the Walking Dead). “Especially to bring the experience at home to make people feel better.”

Lorenzo plays high school senior Josh Torres, who has a fascination with teen films from the ’80s and expects to have this grand moment where he gets the girl of his dreams, Zoey, played by Alyssa Jirrels (Alexa & Katie).

“Josh is this kid that thinks that love is a certain way of what social media and the movies tell you that it is,” Lorenzo explains. “I would say the theme is expectations versus reality that you might expect one thing, but the reality is a different thing, which is so much more beautiful than what you make up in your head. And it’s a big coming of age story for this character.”

To make an impression on Zoey, Josh and his neighbor/best friend, Molly (Vanessa Marano) orchestrate a road trip to a music festival to see lovelytheband. Along the way, the group of friends have new experiences and learn more about themselves and each other.

While David Henrie says the film is a throwback to ’80s movies with the popular girl being the goal for the main character, there is also a fresh take on it.

“We purposely wanted to flip tropes on its head. That girl never really got a fair shake and never had an arc in a lot of those movies. So we give her an arc and make her a complex character, like all women,” he chuckles. “Strong, talented, a lot more to the table than just one thing.”

“Zoey is a girl who has defined herself by other people’s image and opinions and relationships to her instead of what really drives her and her own identity and her own values,” explains Alyssa Jirrels. “She’s beginning to feel like a lot of young women do around 17 or 18. We get to see her kind of go through that journey over the film.”

The film also stars Jake Short, Bug Hall, and former Wizards of Waverly Place stars Gregg Sulkin and Jeff Garlin. “It wasn’t intentional,” David says about his old castmates being apart of this project. “It was more like I wanted to get people I trusted and who I knew could perform for certain roles. And so I went to people who I knew were good actors and I had a good relationship with and that kind of naturally fell into place.”

With its good vibes and romantic tingles, This Is The Year also delivers lots of laughs with Gregg Sulken as Kale, a self-absorbed artist dating Zoey and David Henrie himself in a dual role of ’80s star Patrick J. Michaels and Molly’s love interest Sebastian.

This Is The Year was filmed in Mobile, Alabama, which Alyssa Jirrels said felt a lot like summer camp. “We became a family in this little southern town. It’s a special and kind of heartbreaking experience. So you just fall in love with each other, and then y’all go home.” Alyssa says it was also a blast hanging out with “so many Henries”.

As for Lorenzo, who along with David and their father, James, own Novo Films, his favorite scenes were when the whole cast was together toward the end of the film.

When asked about the name of the film and the ironic timing of 2020 being the release year, Lorenzo Henrie says it’s actually a blessing.

“It was pretty providential because some people might think that 2020 is the worst year ever,” Lorenzo says. “So this is the year that school got taken away or things were lost. But I think with all these negatives, there has to be a greater light at the end of the tunnel. With this movie, we’re trying to take a spin on that. It’s a feel-good movie, which, we feel as a company that’s what movies should do, is make you feel good. So many kids got high school graduation taken away from them so they can relate and watch this journey of this movie of these high school kids. So that’s why we think it’s so necessary. This is the year you can.”

To help promote the movie as well as inspire people to turn this year around, there will be slap bracelets that have specific challenges on them like “say hi to a friend” or “do something good for someone else”.

“At the end of the day, the characters learn how to love someone else more than themselves,” Lorenzo adds.

This Is The Year comes out Friday, August 28th. Grab your ticket to watch the movie and attend the virtual premiere for just $11.99 at thisistheyear.film. Or if you rather not spend the night watching a fun film with an awesome message, with some of your favorite former Disney Channel stars, you know, that’s cool too…

To read our full interviews with David Henrie, Lorenzo Henrie, and Alyssa Jirrels, check out the Fall 2020 issue of StarShine Magazine available now.

In a last ditch effort to win over the girl of his dreams, a nerdy high school senior and his best friends embark on a road trip to see their favorite band at the biggest music festival of the year. 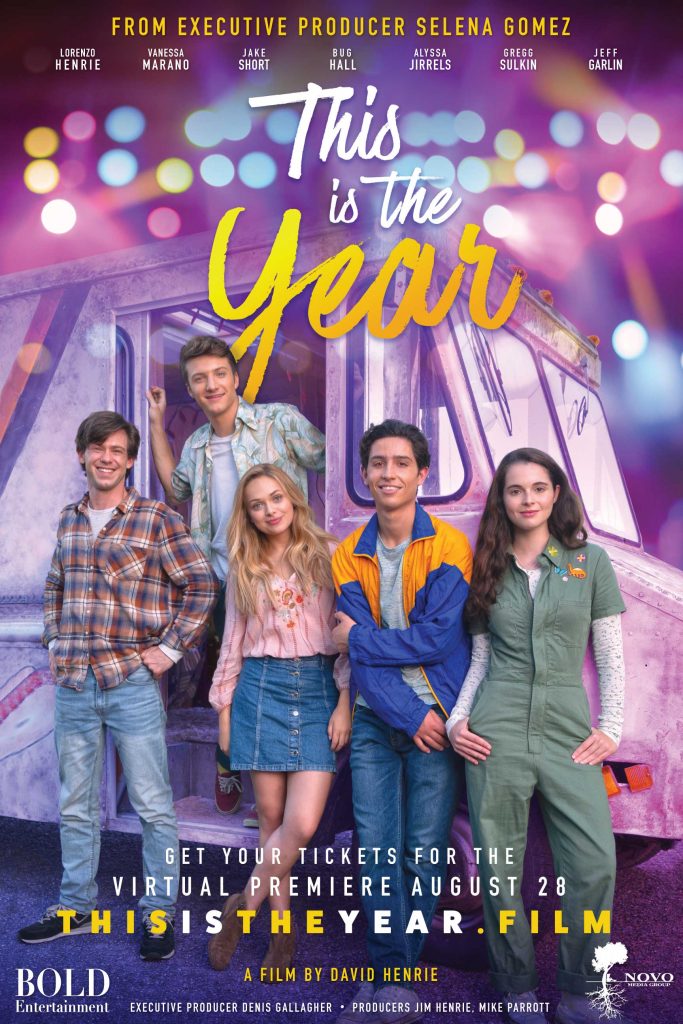