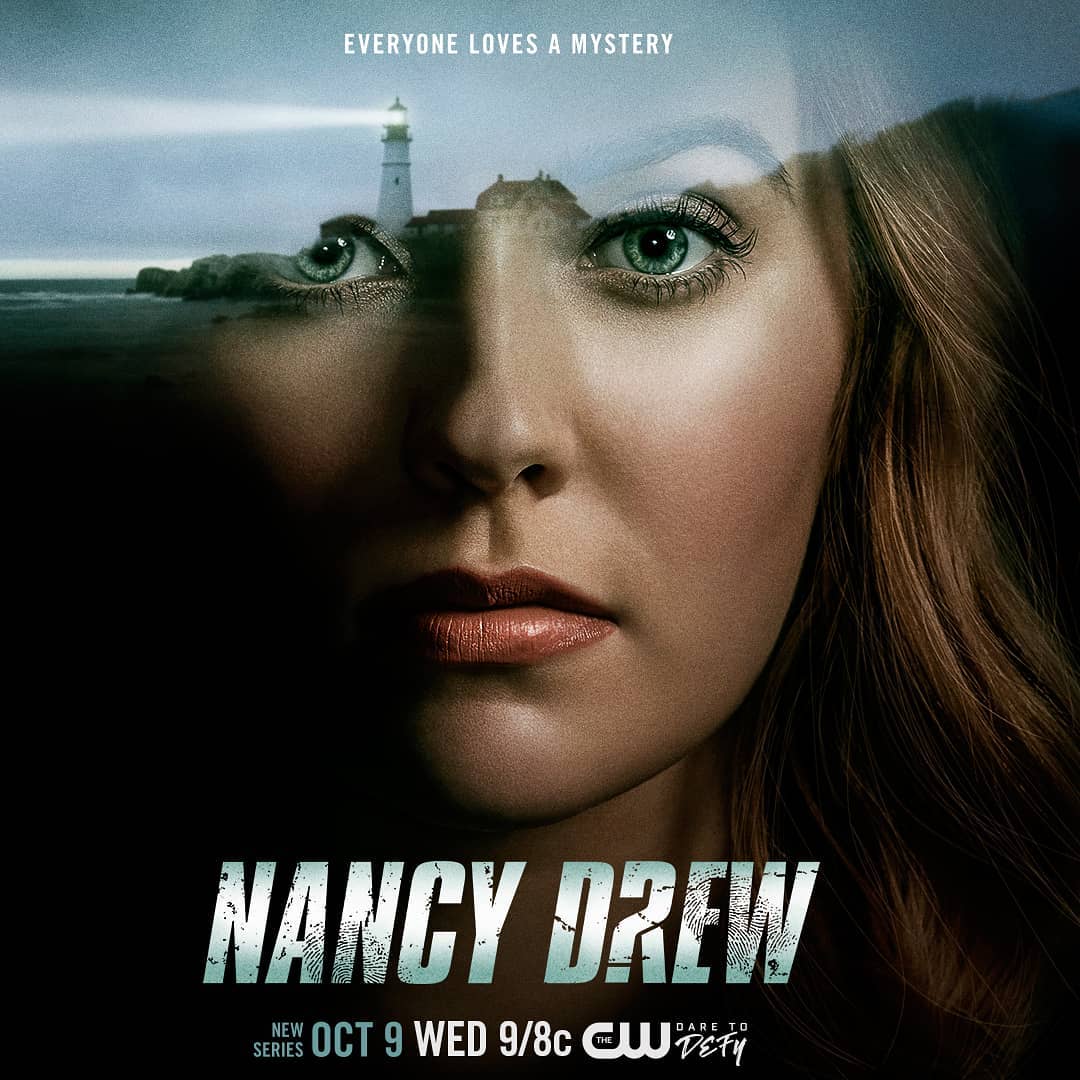 The origin of Nancy Drew dates back to 1930. Many recreations of her character have appeared in pop culture from books to movies to TV series. With the success of their comic-based shows like Riverdale and Arrow, it’s not a surprise that The CW is now taking a crack at their rendition of the famous female teenage detective! The all-new Nancy Drew series premieres on the network this Wednesday, October 9th following Riverdale‘s season 4 premiere.

Nancy (Kennedy McMann) is a high school graduate working as a waitress in her hometown of Horseshoe, Maine. The sleepy town is haunted by the legend of beauty queen Lucy Sable, a fact that weaves in and out of the pilot episode. While once intrigued with mysteries, Nancy has hung up her detective hat after her mom passed away, but of course, that all changes, or else we wouldn’t have a show!

After a murder occurs outside of The Claw, the diner Nancy works at, she, her co-workers, and secret boyfriend, Ned “Nick” Nickerson (Tunji Kasim), are the only suspects in the crime. Joining Nancy and Nick as possible murderers are Nancy’s boss and former schoolmate, George (Leah Lewis), the posh Bess (Madison Jaizani), who is suspiciously slumming as a greasy spoon waitress, and stoner Ace (Alex Saxon).

As the episode unfolds, we scrape the surface of these characters that are not as innocent as they all appear. Meanwhile, Nancy’s old habits die hard as the lure of mystery calls her name once again. Plus, there’s the bonus of clearing her own name in the murder of the socialite, whom she served her last plate of food to. While Nancy suspects the woman’s rich and arrogant husband, Ryan Hudson (Riley Smith), others speculate the ghost of Lucy Sable had a hand in it.

While the plot isn’t hard to immediately get sucked into, the characters, however, are. Kennedy McMann makes a fine leading lady, character flaws and all, but it takes some time to warm up to the rest of the gang. In future episodes, I think, and hope, the banter between George and Nancy expands since their history of being high school rivals is hinted at.

The acting could have been better from the supporting cast, but after watching the entire episode in its entirety it has now occurred to me that the viewer is supposed to sense something awry with them. After all, this is one of those shows where everyone’s a suspect and has something to hide. Even baby-faced Scott Wolf, who is playing Nancy’s dad, has already hidden a secret! (Author’s Note: The fact that Scott Wolf is playing a father makes me feel old since I was crushing on him back in Party of Five, and if I’m really honest, it goes back even further to his Kids Incorporated days!)

With most new television shows, it takes a few episodes before you’re completely hooked. Watching the first 30-minutes of Nancy Drew, I kept that in mind as I wasn’t “caught” yet… and then BAM! The last ten minutes unveiled small secrets about each character that leaves me needing to know more. If I wasn’t already tuning in to the next episode, the show’s writers made sure I would be with the ending! The last few minutes had me on the edge of my seat, semi-covering my eyes, with the hair on my arms standing on end. Officially hooked. Well done!

Larry Teng directed the episode written by Noga Landau, Josh Schwartz and Stephanie Savage with story by Noga Landau. Tune in live this Wednesday, October 9th at 9/8c or watch it the next day on The CW website or app!

Review: ‘Legacies’ Episode 204: “Since When Do You Speak Japanese?”