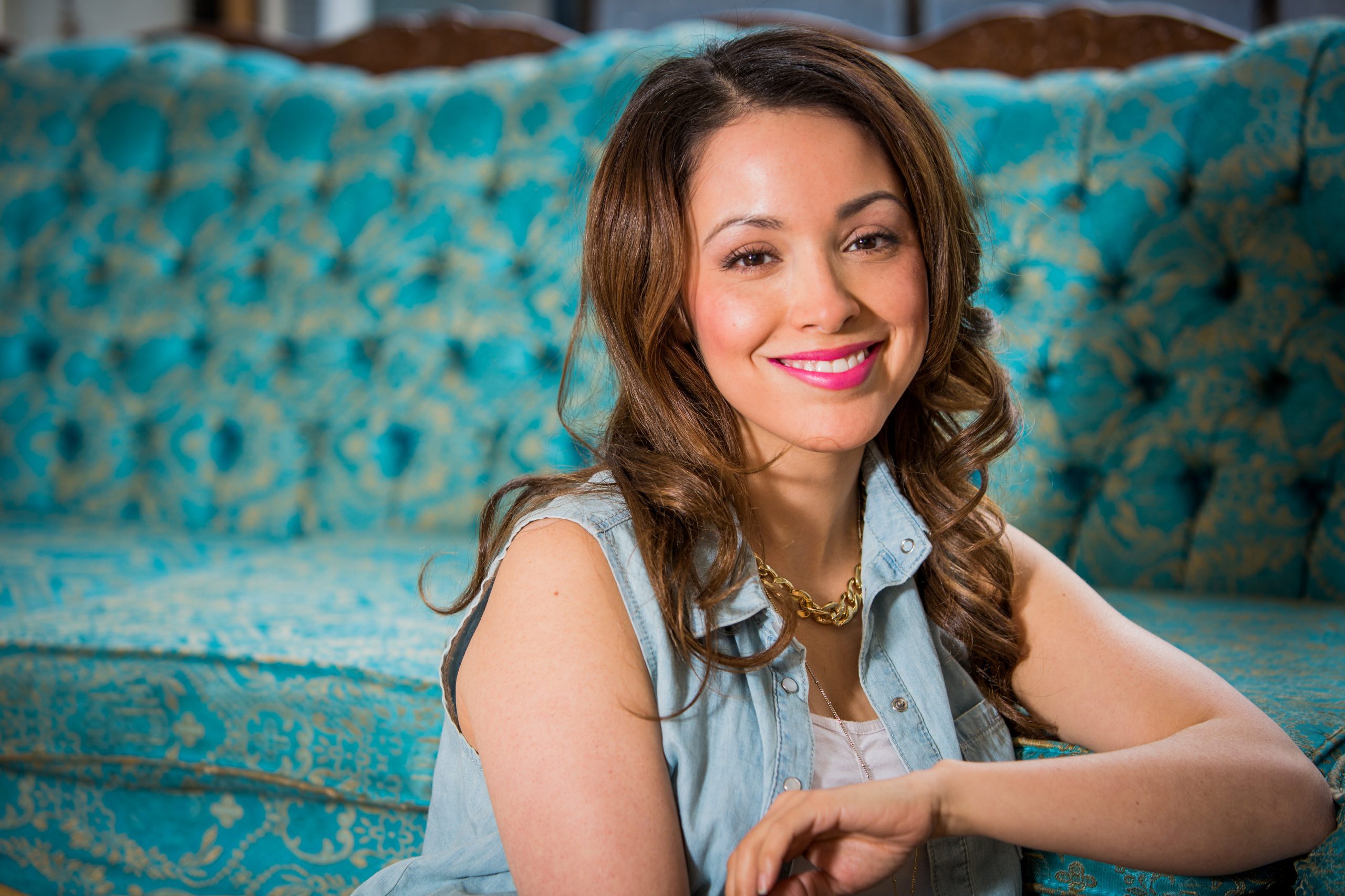 If you have an Apple TV+ subscription, you’re treated to the reboot of ’90s kid mystery series, Ghostwriter, which premiered with the service’s launch last month. Actress Tamara Almeida stars as “Young Grandma Tess” in flashbacks throughout the series and brings us the scoop on the new version and her role.

Hi Tamara! Thanks for the interview. First, we want all of the details of the new Ghostwriter show! Tell us about this show and your role.

Hi StarShine! Thanks for having me. Excited to chat 🙂 For those who don’t know, this Ghostwriter reboot is a reimagined version of the original. It follows a group of four children who team up when a ghost starts haunting their local bookstore. Fictional characters are released into the real world and together they try to solve the mysteries surrounding our ghost’s unfinished business. For context, the local bookstore is owned and operated by “Grandpa”. I play the character “Young Grandma Tess”, his wife, who we get to see in flashbacks. She’s a driven, loving woman, with an innate belief to do what’s right. To not give anything away, that’s all I can say at the moment!

Did you ever watch the original Ghostwriter series?

Yes! After school, every day on PBS. This, Punky Brewster, and Saved by the Bell were my faves. When I found out I was going to be on this show, I had those ‘pinch-myself’ moments because it had played such a big role in my childhood. Somebody pass the pen necklace!

You recently completed a short film, Date Night. What can you tell us about it and how we can see it?

Date Night follows Alba (Bea Pizano) who is about to go on a date, which she hasn’t done in years. Nervous and vulnerable, compounded by feelings of insecurity (age, language barriers, and too much makeup), are explored in this powerful short. I play one of her daughters, Carmen, who is the eldest of the two. Carmen had to take on several responsibilities at an early age to help her parents who had immigrated from Colombia. Carmen is headstrong, fiery, and has a complicated relationship with family. I identify with this story deeply, with the sibling and parent relationships depicted with such honesty. There can be a lot of love there, but at times, it can feel very messy and complicated depending on the dynamics. We had our premiere at the Toronto International Shorts Film Festival this month, and once we finish with the festival submissions, we will likely share it online. I’ll definitely be sure to share the link through my social channels once we complete our festival run. Can’t wait for everyone to watch it.

You got your big break on a Hallmark holiday movie. Be honest, are you a sucker for those cheesy, but loveable movies?

I am indeed a mega sucker for these films. I fall knee-deep into the magic of “Countdown to Christmas”, and I always cry when they end up together in the end (spoiler alert: they always end up together). I know they’re mega cheesy, but that’s what makes them so good! They are their own genre. Also, I gotta say the titles of these films are quite possibly my favorite part.

What was your favorite role so far?

What I love about acting is the variety one gets to play with. I have had a lot of fun in different roles for different reasons but I absolutely loved Young Grandma. She has been my favorite so far. Getting a chance to play someone strong, well-written, from a different time period, with a great storyline? It was such an immense pleasure that it’s hands down my top role.

If you could pick any co-star for your next role, who would you choose?

Andrew Scott, aka Hot Priest from Fleabag. Watching that second season was excellent, and I would give anything to act off of him. He’s incredible.

If you could adapt any book into a movie and you play the starring role, which book would it be and which role would you play?

Such a great question! I would go with “Good Morning, Midnight” and I’d play Sully. Give me a complex woman, space as our landscape, and a bit of existential questioning? SOLD.

How do you like to prepare for a role?

I prepare quite a bit. I start by reading the script and begin making notes of whatever anyone says about my character. This gives me information outside of my initial impulses. I read it a bunch more and then I start scribbling any impulses that come up. I’ve taken this cool class the last couple of years focussing on character creation, so the next step would be to determine what ‘character type’ I believe this person may be. Once I’ve got that as my blueprint, I work the text and get clear on that I feel is being said outside of the words, and try to make it as personal as I can.

I recently wrapped on a short called Baby Making 101 about a couple planning to have a baby. I play Rachel, our potential mom-to-be and we follow her narrative as she navigates this process. It’s one of those short film scripts I read over and got excited about. Then nervous. Could I tell the truth about what I know surrounding this? It’s honest, real, funny, and gives voice to vulnerabilities I strongly identify with as a woman. I’m also focusing on creating and producing new work in 2020. I’ve written a first draft of a sci-fi series, and working on those edits and then beginning the pitch process next spring. I plan to shoot the proof of concept at the beginning of the year. It’s a big learning curve and I’m leaning on mentors and colleagues to help me as I navigate this brand new process. Other than that, I’m looking to learn more about the fundamentals about meditation and how to teach it someday. That’s a big interest of mine and hoping to find a way to make it something I can pay forward with offering this to others for free someday. I am also auditioning, writing, and producing!

Where can we find you online?

Find me on Instagram @tamararubyalmeida. I also have Twitter and Facebook with the handle @almeidta, but truth be told, I don’t frequent those as much as the ‘gram. Thanks for having me, StarShine!

Check out the trailer for Ghostwriter!