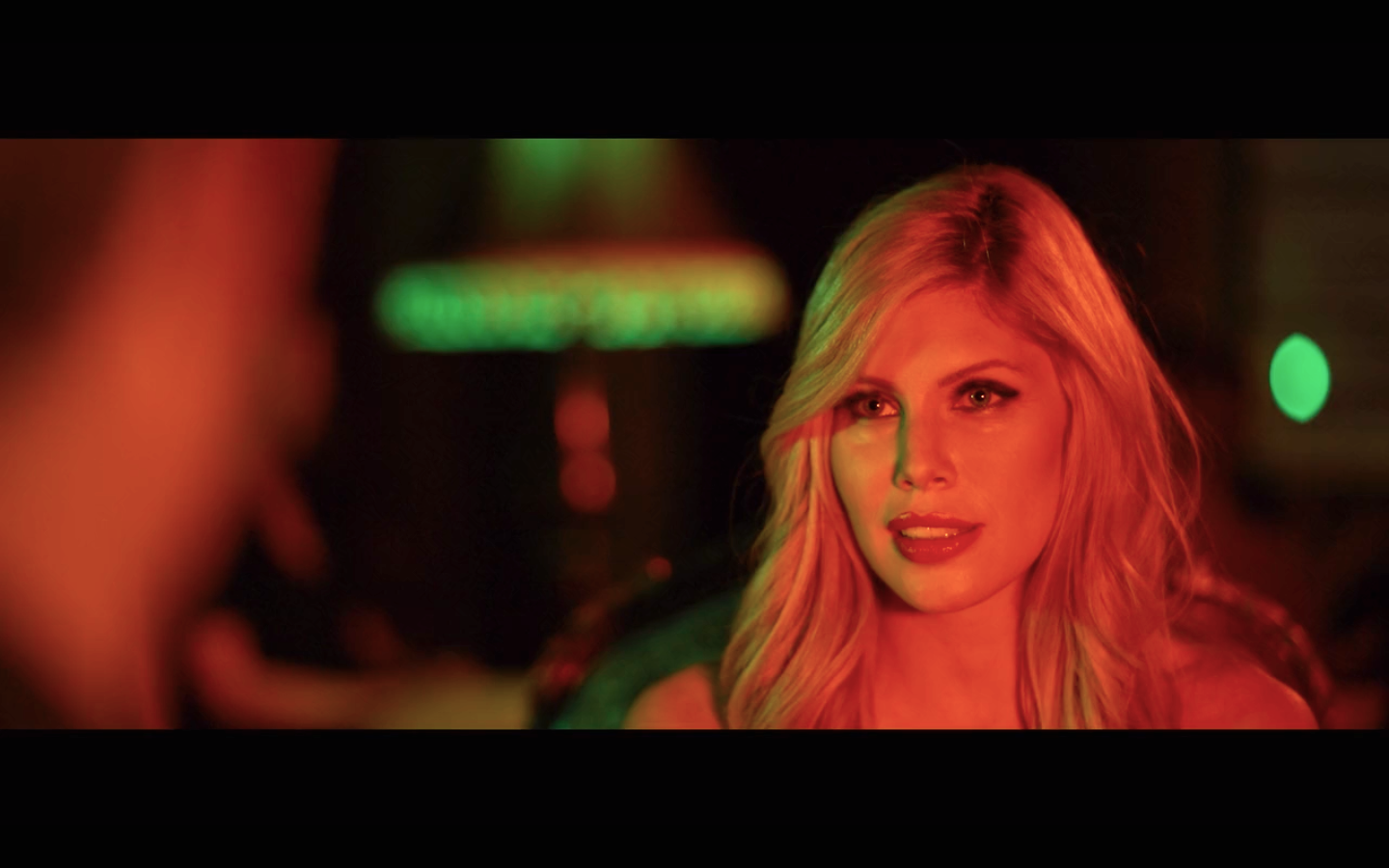 2050 was released last month with critical reviews. The sci-fi fantasy film involves a questionable plot about sex robots, or the more politically correct term, e-mates, walking around and being in romantic relationships with humans.

Stefanie Bloom plays “Sophia”, a beautiful blonde e-mate that was created to please Michael (David Vaughn). While the film draws its controversies, it also raises questions on adultery, ethics, and how far machines can evolve.

I chatted with Stefanie about the film, modeling, and her upcoming TV series, Little Cupid and Entitled.

What did the audition look like for your role as Sophia?

My audition was actually the scene with Michael (David Vaughn) when we were in the robot parlor. I wasn’t teasing him, but I was more or less challenging him, like ‘do you want to take my clothes off?’ Kind of like he was so taken back at creating me and I was like ‘Well, here I am. This is what you made.’

Right, like you don’t have to beat around the bush kind of thing.

Yeah! [The audition] was exactly that scene and I was like, ‘ooh, this is really super sexy. I love it!’ It was just a different kind of role, so it was very challenging in the audition. It was uncomfortable, but I liked it because it gave me a little bit of power. I was able to take the scene where I wanted to take it and obviously it worked so I was like ‘yes!’

You were a model first, obviously. You’re beautiful.

How did you get into modeling?

I started with commercials when I was really young. Probably about 9-years-old. I feel like for kids back then, nothing was e-mailed. Nothing was electronic so you had to go into the city and try out for things. I feel like I was mostly sent modeling things just because I was young. It was print work and commercials when you’re young. I think as you get older it evolves into movies and TV. At least for me, that was how it worked. I mostly just stuck with the modeling. My acting didn’t take off until I was older because I was able to study and train for it more. I just remember going into the city and taking the train for every single audition where you either sent in your resume with your headshot through the mail and that’s how I did it. It just evolved from there.

What was your worst audition experience?

It was for one of the biggest casting directors. I had a stomach bug and I had three full pages of dialogue. It wasn’t just a couple of lines here and there. I think I had a day and a half to learn it. I spent probably that full-day being really sick and then half a day trying to cram in all of my lines. Of course, I bombed it!

The casting director was like, ‘okay, eyes up’. I was like, ‘oh my god, I was hugging a bowl for the past day.’ Of course, I didn’t tell him that, but I was just like ‘why did I show up?’ I just wasn’t prepared. I wasn’t feeling good. I was probably looking green and it was horrible. But I was like, ‘you know what?’ Stranger things have happened and let me just show up and try. Of course, I didn’t get it.

If you didn’t go, you would have always wondered what if I would have gotten it if I went.

Yeah, and it would have a good story to tell too. [laughs]

Now talking about 2050, do you think there will be any truth to this movie when it’s actually 2050?

I think there will be truth to it before 2050. I feel like I see in the news every now and then … I’ve even seen Dean Cain talk about it … There are things out there that are talking about robots. There are even some out there that are being used in different ways. I even think there is a Sophia robot. I feel like I’ve heard about it overseas. I think she even has her own Twitter handle, @SophiaTheRobot or something like that. So I feel like it will definitely happen before 2050.

There are drones in the movie that deliver pizza or bring you things through the window. I mean we have drones now that film movies, so why not take this robot thing to the next level? I mean there’s just so many things that we can do with the touch of our hand. We can order things now and have it in an hour. So I really believe this robot thing is going to happen way before 2050.

It’s funny. I think about that movie Her with Joaquin Phoenix. It was about him falling in love with his computer basically, but it was just a voice. Now we have Alexa and Siri and I’m thinking that could totally happen. [laughs]

I liked that in 2050, the clothes were normal, but there were all of these drones flying around.

Right, no one was driving in the air.

I think that happened in the Terminator movie where people were driving in the air. I don’t think we’re there yet.

What was it like working with the cast and crew on 2050?

Oh my gosh. I thought immediately that this was just going to be work. I’m going to do my job and get through my days and go home. This cast … We have all become so close. Especially Princeton [Holt, the director]. We still keep in touch so much to this day. We filmed this three years ago. Through all of these years and all of the promoting, and premiere, and everything – I still hang out with the cast when they’re in New York. If they’re around, we just go out for a drink. I only filmed with David Vaughn, who played Michael, and he FaceTimed me before we started filming just so we could be comfortable with each other. We had very intimate scenes. I feel like that doesn’t happen on every project. You don’t get to know somebody until you show up. I thought that was so nice.

According to your IMDB page, it looks like you have a lot of projects in the works. Can you tell us about any of them?

I have two pilots I’m working on. One, I just actually finished the first season. They’re still filming it, but my part is done. It’s called Little Cupid. It is actually the exact opposite of what 2050 is. It’s a very family-oriented show. Just a quick rundown … I lose my husband. He’s a marine and eight years later in the show, he comes back and only my daughter can see him. They talk to each other and the whole season is me trying to figure out if she really is that torn or does she need to get help? She keeps talking to herself … But she’s really talking to her dad. The show’s called Little Cupid because he’s brought back to help other people fall in love. It’s such a heartwarming show.

Then there’s another show called Entitled. I play a bit of a sexy role and it’s that dirty kind of funny. It’s directed by Ryan Sarno and it’s about this family and their father dies. He kept his family business kind of secret from the kids and told them he was doing something else. He made a multi-million dollar sex toy company and left them all millions of dollars. I played the mistress, which was really funny. It’s hysterical, but it’s that dirty funny. So you’re either hysterical laughing or like ‘oh my gosh, this is way over the top’.

2050 is now available on video on demand. Watch the trailer below!