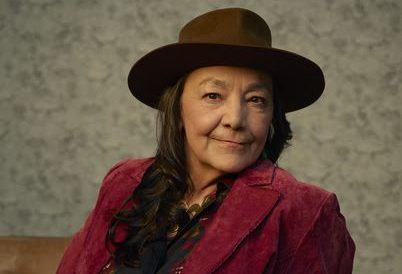 November is Native American Heritage Month and to honor that, we wanted to spotlight actress and innovator, Tantoo Cardinal (Stumptown, Dances With Wolves).

Tantoo Cardinal is instantly recognizable. With over 120 films, television series and theatrical productions to her almost-50 years in the entertainment industry, it’s not surprising to see her on TV. On Sunday, October 27, in Los Angeles, it happened again, this time as she supported friend and fellow actor Wes Studi when he received an honorary Oscar at the Governors’ Awards, becoming the first Native American to do so. As cameras scanned the applauding audience, one caught Tantoo –  a Canadian-born Indigenous Métis/First Nations’ actress and activist. Cardinal was sitting with Studi, with whom she co-starred in the Oscar-winning film Dances with Wolves in 1990.

“When Wes received his award I was standing there, smiling and clapping for him – for his achievement, it was a magnificent moment for him. To have one of our pivotal Indigenous actors honored at last. We are becoming more visible – but as an Indigenous actress, we still have a way to go,” said Cardinal, 69. “I was thinking about who we are, what we have to offer, and about the industry’s long history of male dominance. I will have been in the industry for coming up on 50 years, and I’m hoping that we – Indigenous actors AND actresses – will one day be recognized for our legacy.”

Born in Fort McMurray, Alberta, Canada, Cardinal’s latest role is in the ABC series “Stumptown” as Sue Lynn Blackbird, a female Tribal Leader who runs a Tribal government and its casino gaming operation. Based on the graphic novel, the “Stumptown” main character, Dex Parios (Cobie Smulders), centers on a Portland, Oregon-based female former Marine with PTSD turned private detective. “Stumptown” can be seen on Wednesday nights (10:00-11:00 p.m. EST) on ABC. Episodes can also be viewed the next day on ABC.com, the ABC app and Hulu.

Airing in primetime on ABC, the show grants Cardinal an empowering opportunity to display her acting prowess on a consistent basis while sending a message of strength to a culture whose struggles have been marginalized.

At the start of Native American Heritage Month (November), Cardinal shared her thoughts on her role and its cultural impact as well as the societal challenges facing the Indigenous population.

How important is it for Indigenous Actors and Actresses to have representatives and featured roles in entertainment?

“Representation is sorely needed – we’re beyond it being a first step. As an actor, I want to be a part of productions that tell our stories, to create my own place of incubation that allows me and our actors to create and build their artistic strengths. The discussions of parity have not crossed over to Indigenous woman. We’ve existed in Hollywood and told many stories through words and narrative and emotions on screen…from the periphery mostly.  So, while we have not had recognition, I believe that the industry is now primed to be more inclusive of diverse voices and this includes the voices of Indigenous women. I am excited for the opportunities that are ahead.

At the ceremonies on Sunday, Geena Davis received an Oscar, and a big part of her tribute was her work on behalf of women. That’s wonderful and important and supportive for them. For the Indigenous actress in the world of Hollywood, in my opinion, we have to take advantage of every opportunity that we have to have the dialogue and to tell the truth about who we are as a people.

How has your heritage and your journey affected or emboldened your cause?

The courage that it takes to go out into this world, to bear your soul among strangers, especially those who have a completely different concept of who you are in their minds based on what their society has fed them, is something that cannot be explained.

In my experience of the late 1960s, a part of our resurgence was telling the truth about our ancestors and our history. I wanted to tell our stories. I wanted to portray my ancestors. I saw acting as my opportunity.

I’m from a mixed culture in Canada. I identify with four Nations – Cree, Dene, Nakota and Métis. The language that I grew up with was mostly Cree and Michif.  I learned later about my Nakota heritage, which is Lakota and Cree blend, and I was raised as a Métis. So, my career has been about all of those stories.

Identifying with all four Ways means I’ve had to fight through those stereotypes. For my legacy, I really want to be able to help bring those stories out with our young people.  To create a place of comfort for them in identifying their path and telling those stories – a school.

Would you characterize your character in “Stumptown,” Sue Lynn Blackbird — whose culture, regality and command for respect resonate with every scene — as good or bad?

Well, it’s kind of hard to tell. Some call her sinister, some, bad-assed. At this point, it depends on the direction. I like playing that edge and leaving it to the audience to determine.  That’s a lot of what is going on. It’s as much a journey of discovery for me as it is for everyone, I think, because how often do you have a character of this magnitude on mainstream television? It’s thrilling to play a strong female in charge, a female Tribal Leader, who has purpose and integrity-driven to protect and provide for her tribe.  She leads with integrity, but she is also cunning in her approach – which is exciting to play someone who has the intellect and veracity to lead and command respect. In a way, it’s an opportunity to see where our old ideas fall away of Indigenous women leaders in the tribe and what the new vision is.

Where is the origin of Blackbird’s royal privilege?

I believe that the majesty is a natural element of the role of the character, because you have to have that power and strength, and Sue Lynn Blackbird comes by her power quite honestly. It’s not a manipulated or bought position: It’s an earned position. So, she has to have strength and power, and, as far as I’m concerned, that strength and power comes from our culture. We’re coming back from genocide as a people, and so much of our culture, our ways, our families and communities and everything about us was marginalized to the point of near annihilation.

So, motivation born amidst devastation?

From my perspective, our strength and our comeback and our healing is primarily through our culture. We’ve been silenced for generations. It’s not as if it’s been swept under the rug as much as the rug’s been placed on top of us. Society has walked all over us without even paying any attention. People have not recognized that. We’ve had to rescue our pride from the hands of our oppressors and the colonialists. That’s my perspective,” said Cardinal. “Strong hearts to the front. Indigenous women are resilient.
*Big thanks to Hanna Bolte/Bolte Media for writing this article.

Quirky Comedy ‘Dead Pixels’ is Everything You Never Knew You Needed!