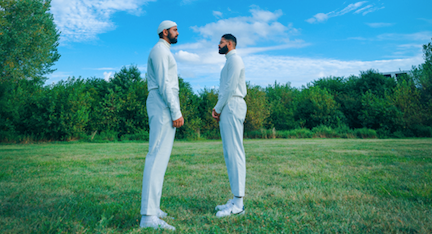 Unlike their name, HOAX is the real deal. Their single “You Get So Alone Sometimes” combines beautiful melodies, heartfelt lyrics, and serene instrumentation. Take a listen and get to know this Queens-based duo!

Check out all of our songs of the week on our Spotify Playlist!

HOAX is an indie pop-rock band from Queens, New York. It is the musical brainchild of Michael Raj and Frantz Cesar, who create the sonics and concepts behind their self-described style of “empathy pop” music.

Their modern vintage musical sound draws from a wide range of influences like 60’s pop, 70’s Motown, and alternative R&B, and their sound is often described as “the beautiful sound of sadness” – a description coined by a close friend. Their music thematically focuses on the human condition, explorations of social constructs, and the decisions people make based from them, all tucked underneath pop melodies.

Their latest single entitled “You Get So Alone Sometimes” details the human struggle with loneliness and ultimately trying to embrace it. Mike Raj confides, “I started thinking of it as the empathy of loneliness. It’s like a feeling of understanding what it means to be lonely and being okay with it, not okay in the sense of hopefulness – like “Oh don’t worry! It will be better in the future”, but more like reconciling with loneliness as a true mark of feeling and being human. We feel alone because we know what it feels like to feel together with others. One can not exist without the other.”

“You Get so Alone Sometimes” is out now and off of their upcoming full-length album based on a story/screenplay the band wrote exploring the human condition.