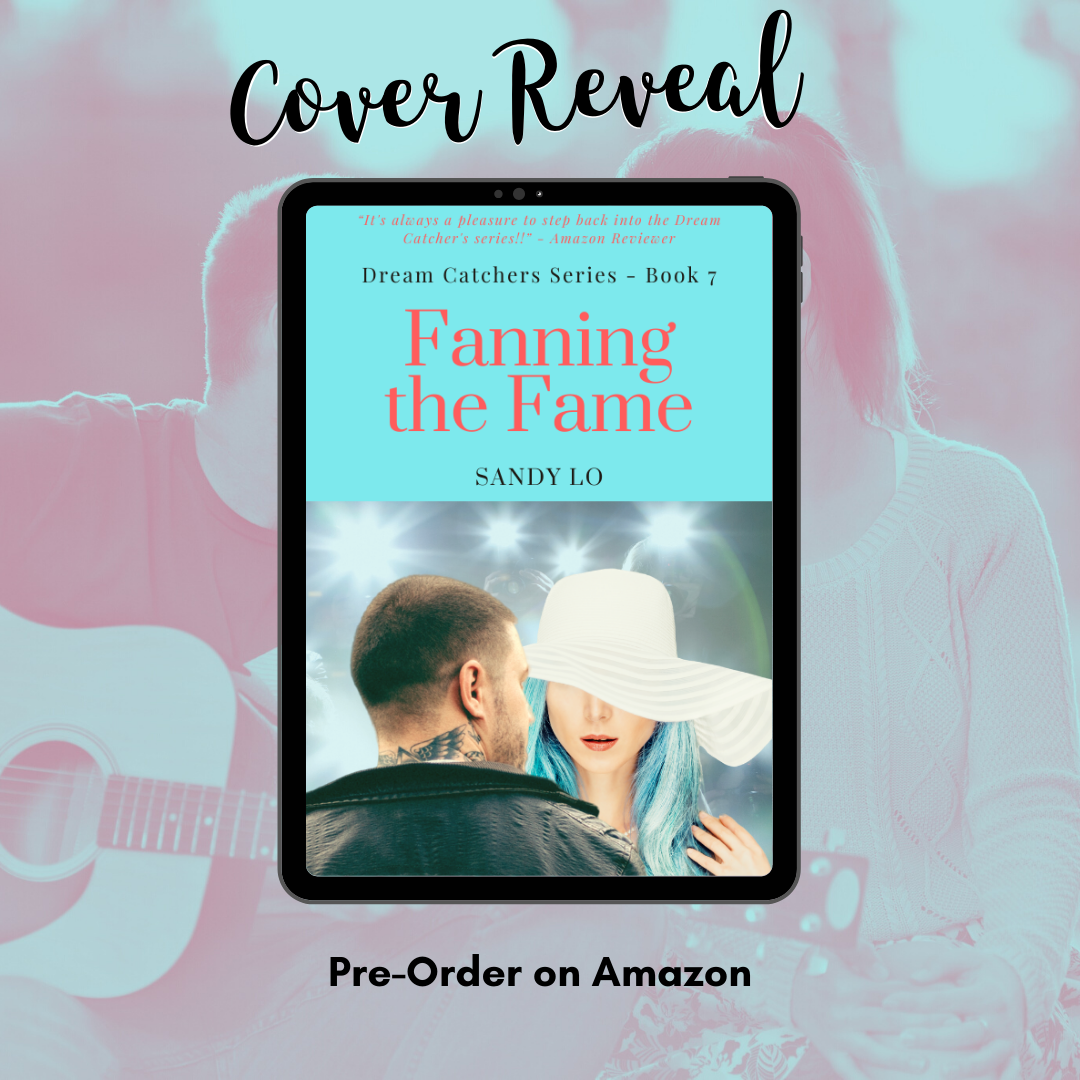 StarShine Magazine editor and fiction author Sandy Lo released the cover of her upcoming romance novel, Fanning the Fame today. The book will be released on Amazon on August 28th.

Fanning the Fame is the 7th book in the rock star romance series, Dream Catchers, and it marks the 11th book release by Sandy Lo.

Along with the cover reveal, Sandy has also launched a giveaway to win a $25 Amazon gift card and an autographed paperback of Fanning the Fame.

Dream Catchers (2010) introduced readers to the fictional rock band Tortured and followed the lead singer Jordan’s love story with aspiring photographer Haley. With each book, Lo adds to the story focusing on a new couple linked to the band.

Fanning the Fame is told from the points of view of Tortured’s drummer Danny DeSano and the outrageous blue-haired pop star Topaz. “I feel like readers of the Dream Catchers series already have a love-hate relationship with Danny D. He’s a great friend to the other characters, but he’s also a heartbreaker and rough around the edges,” Lo explains. “Hopefully fans will get to see how much he’s grown over the course of the series.”

As for FTF’s leading lady, Lo says she based Topaz off some of the pop stars she listened to in the ‘90s and early ‘00s that were overly sexualized and controlled by their managers and/or record labels.

“Fanning the Fame is very much about respecting and standing up for yourself as a woman. Being true to yourself and loving yourself is sexier than anything you can do to your physical appearance,” Lo says.

Sandy Lo has been an entertainment editor since 2001. She founded StarShine Magazine and was the first person to ever interview Taylor Swift professionally. Since 2009, she has been self-publishing novels that usually have a celebrity or musical character involved. She was recognized as one of the 50 Writers You Should Be Reading by the Authors Show and many of her books have made it on Amazon’s Top 100 Coming of Age list.

When Lo is not interviewing celebrities or writing novels, she is a freelance digital marketing and brand manager. Lo lives in NYC with her rescued bunny, Zuko.

Being a drummer in a famous rock band has its perks. For Danny DeSano, getting the girl has never been the problem. Holding onto her was. After a failed marriage and watching his ex-wife move onto someone else, Danny is reevaluating his lifestyle of parties and meaningless flings with super models.

In order to be a positive role model for his son, he wanted to change his image and settle down. That was before he met pop star Topaz, whose image is even more tarnished than his.

Patty “Topaz” Del Feliz had one dream in life … to be wanted. She considers her story to be that of the ugly duckling and now that she’s desired by millions of fans, it’s just not enough.

Her image was built solely on the motto “sex sells”. Topaz is quickly realizing looks don’t buy respect … or love. Her last romantic relationship flopped due to her public party girl image the paparazzi is always eager to exploit.

When Danny D. – the bad boy of the band Tortured – shows interest, Topaz can’t help but want him, in spite of his reputation. She knew it was purely lust and she accepted that. Using each other is fine if it’s mutual, right?

That is until Danny gives her the courage to go after a real music career and not one based on her next outrageous publicity stunt.

While developing their business relationship, Danny and Topaz can’t deny their magnetic attraction to one another. Will this be another tabloid romance that fizzles fast or is there something more behind the flashing lights and screaming fans for this dynamic duo?

Fanning the Fame is book 7 of the Dream Catchers series. For the first time in the book series, the story is told through dual points of view and takes a few steps back from book 6, which introduced Danny and Topaz’s interest in one another.