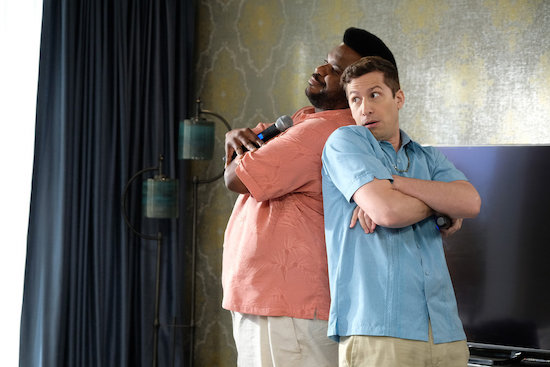 In this week’s episode of Brooklyn Nine-Nine, ex-“Pontiac Bandit” Doug Judy makes his return and Jake is eager to rekindle their friendship! While Amy and Charles has to deal with Hitchcock and Scully to find the perfect vending machine for the Nine-Nine.

Rosa takes Jake to the interrogation room where a man named Shane Reed is handcuffed to the table for being a prime suspect in a string of break-ins. Jake and Rosa is curious to find a wedding invitation to Douglas Judy’s wedding in his car.  Jake is upset that he didn’t get invited to the wedding despite being his best friend and grills Shane to get details out of him.

Jake reunites with Doug Judy and proceeds to ask him why he didn’t receive an invite. According to Doug Judy, he didn’t want his criminal friends to know he was friends with a cop. He eventually invites him to his bachelor party in Miami. Things go haywire when Doug’s criminal friends reveal they stole $10 million dollars’ worth of diamonds, leading to Doug’s sister, Trudy Judy to reveal to Doug’s friends that Jake is a cop.

Meanwhile, Captain Holt returns to the Nine-Nine and Terry struggles to find a business card that Holt holds a sentimental value to. Amy and Charles is on the hunt for the third vending machine in the precinct, with Hitchcock and Scully eager to get in on the action.

The episode does a great job at bringing back Jake and Doug Judy’s friendship. Doug Judy’s return to Brooklyn Nine-Nine is fun and entertaining. He is still the typical Doug Judy we know and love. However, the episode felt thin on dealing with Holt’s return to the Nine-Nine.

Catch ‘Brooklyn Nine-Nine’ Thursday on NBC at 8:30 pm or stream it the next day on Hulu

THE TAKEBACK – Doug Judy (guest star Craig Robinson) is back and this time things between him and Jake (Andy Samberg) are personal. Meanwhile, Holt (Andre Braugher) returns to his old precinct gig, while Amy (Melissa Fumero) and Charles (Joe Lo Truglio) try to find the perfect new vending machine for the Nine-Nine. The episode was written by Dewayne Perkins. Original airdate 3/19/2020.