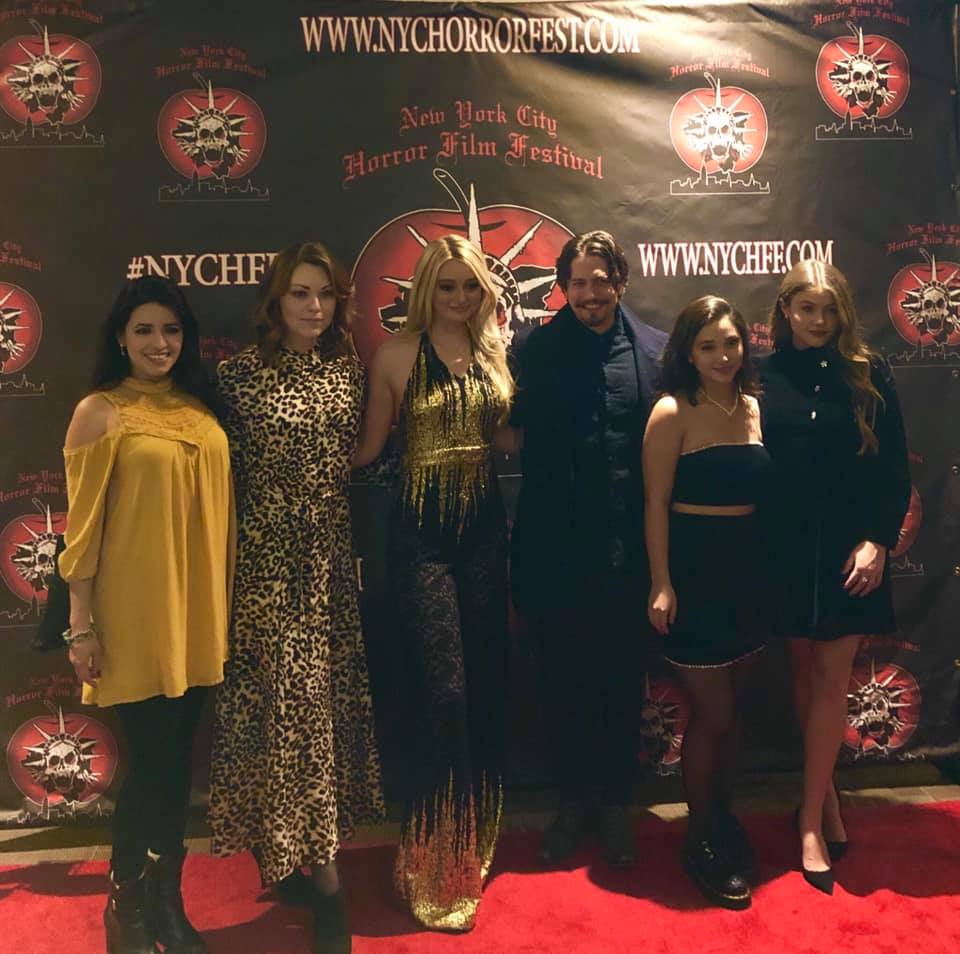 Friday night, Cinepolis Chelsea hosted the New York premiere of the upcoming social horror film, Do Not Reply. The independent film, which was directed and co-written by father-son team, Walt and Daniel Woltosz, has already received two awards and five nominations, including Best Picture and Director, at the Orlando Film Festival. Do Not Reply centers around Chelsea, played by Amanda Arcuri (Degrassi: The Next Generation), a teenage girl who lapses in judgment after feeling ditched by her best friend Mia (Ivon Millan) and being overshadowed by her sister. That lapse in judgment introduces Chelsea to Brad through an app. Brad, played by Jackson Rathbone (Twilight Saga), ends up drugging and abducting Chelsea to add to his harem of teenage girls.

The film’s social commentary is fairly clear regarding the dangers that await us through easy access of technology. “I’m a bit more wary of who I talk to and who I share personal things with,” Arcuri says about her feelings toward social media and dating apps after making Do Not Reply.

In spite of the heavy material the cast had to work with, Arcuri says there was a lot of fun with her filming team. “I’ve never been with a happier crew in my life. Everybody was such a tight-knit family. Everybody knew each other from other things that they’ve worked on. Everybody was very respectful, sweet, caring individuals that really love what they do.”

Co-star Kerri Medders (Alex & Katie) agreed. “There was such a nice chemistry. Me and Amanda, we really bonded.” Medders also spoke highly of co-directors Walt and Daniel, saying they were “beautiful” to work with. “They were very collaborative.”

Medders played Meagan in the film, one of other girls kept prisoner by Brad. “I have a bad case of Stockholm syndrome so I’m in love,” she says. Not only is Meagan in love with Brad, but acts like the jealous girlfriend of the house whenever his affections turn toward one of the other girls.

The entire cast’s performance is incredibly authentic that it’s hard to believe they were acting at times. “It’s hard to play someone so mean and so rough and tough, and who’s not very nice to her kid,” Kaitlyn Black explained. The Heart of Dixie star had a cameo as Brad’s not so nurturing mother.

Arrested Development star Savannah Kennick also has a small role in the film as Chelsea’s sister, Kristina. “I’m kind of just the comedy that comes in at the right time,” Kennick laughs.

As for Brad himself, Jackson Rathbone says he felt dirty after each day at work while filming. “I’d say it’s the darkest character I ever played. I had to go home and shower before I let my kids hug me every night,” he revealed. That filth wasn’t just from the character’s psyche either. “It was actually dirty because we filmed in some pretty dark, and dirty, and grungy environments.”

While the film delivers that final girl entertainment that horror fans love, there is a very real terror behind the story. Ivon Millan, who not only stars as Mia, but is also one of the producers says girls have been going missing where she’s from in Texas since she was a kid. “When they talked about having this abduction story, I was already interested because that’s always been a problem,” says Ivon. She was also excited to be part of a film where women made up 40% of the crew. “It’s been a girl power type of thing.”

The initial story for Do Not Reply came along twenty years ago when AOL chat rooms were a big thing. Daniel Woltosz wondered what that environment was like for “bad guys”. With social media abduction rates on the rise, Daniel and his father Walt felt that the story was even more relevant today, and needed to be updated.

Together, the duo researched FBI cases and statistics and set on the journey to make this movie. “I learned so much about his creative talents,” Walt said of his son. They both got choked up when asked about working together. “Usually I let him win,” Walt joked. “Half the time I was letting him win,” Daniel argued.

While Walt and Daniel Waltosz continue to hit the festival circuit, they’re hoping to secure distribution and release the film sometime in 2020. After watching Do Not Reply, we’re certain it will receive an immediate cult following and look forward to seeing this wonderful cast and crew claim many more accolades.