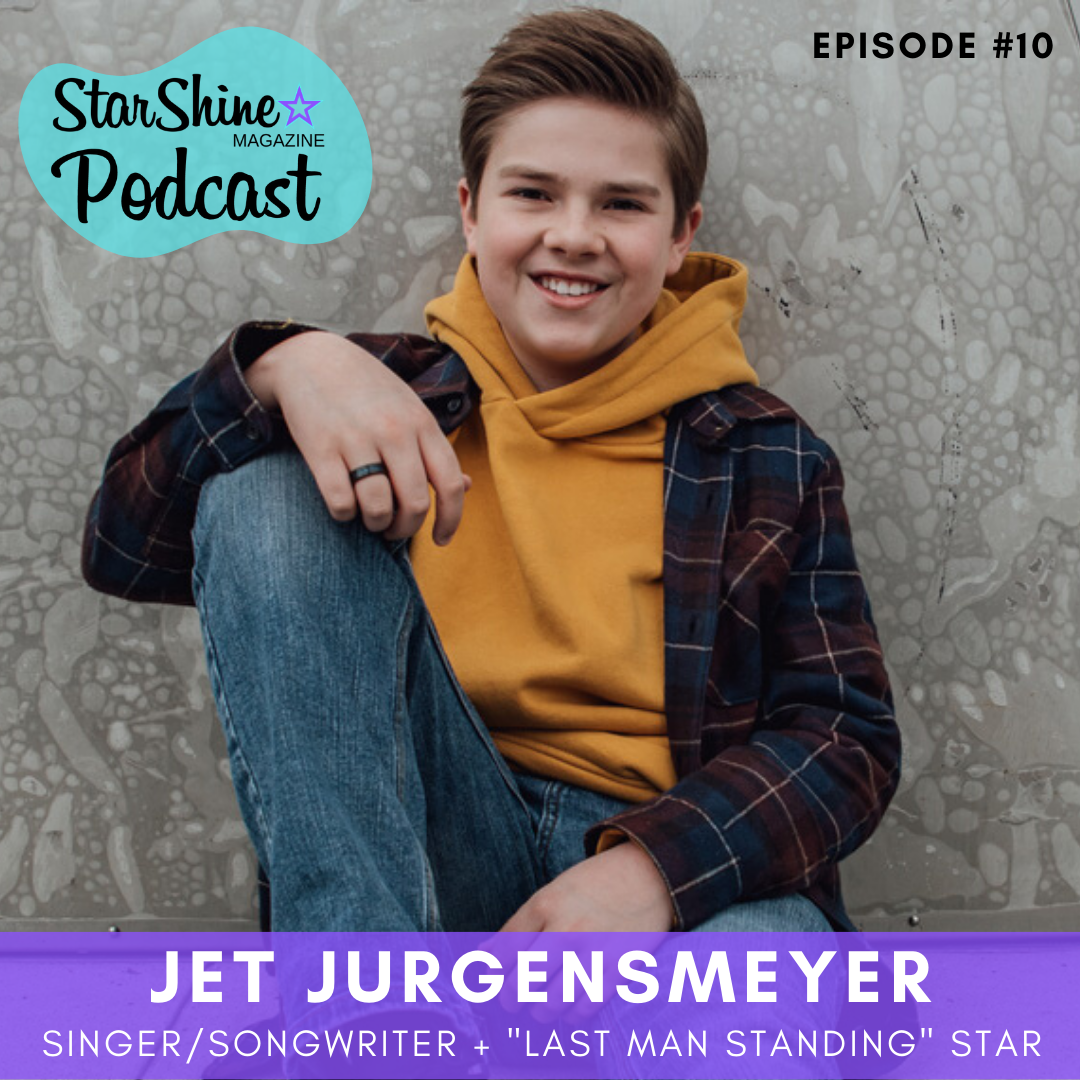 In podcast episode #10, I’m talking to actor and singer 14-year-old Jet Jurgensmeyer. The teen sensation discusses music, including his self-titled debut album, the new season of “Last Man Standing”, and working with goats!

Watch the video for our Song of the Week: “This Is Your Moment” by Jett Jurgensmeyer!

From comedy to drama, award-nominated young actor Jet Jurgensmeyer has brought dynamic characters to life in film and television, quickly solidifying him as “one to watch” in the entertainment industry. With multiple exciting projects slated for release this year, Jet is not slowing down anytime soon.

First, he can be seen starring opposite Valerie Azlynn and Jackée Harry in the indie feature film “Cupid’s Proxy” (Simba Entertainment) set to premiere on VOD nationwide September 12, 2017. Next, Jet can be seen starring as fan-favorite Stinky Peterson in the film reprise of the popular 90s/00s television series, “Hey Arnold! The Jungle Movie,” premiering November 23, 2017. The two-part TV film will serve as the definitive finale of the series, answering all unanswered questions, including the whereabouts of Arnold’s missing parents. Following that release, Jet will appear in the 20th Century Fox film, “Ferdinand,” releasing in theaters nationwide on December 15, 2017. The film follows Ferdinand (played by John Cena), a bull with a big heart, who is mistaken for a dangerous beast and is captured and taken from his home. Determined to return to his family, he rallies a misfit team on the ultimate adventure. Jet will voice the role of Young Guapo, the counterpart to the adult character, played by former NFL Superbowl Champion and MVP, Peyton Manning.

Additional recent film credits for Jet include starring in Nickelodeon’s “Legends of the Hidden Temple,” Disney’s “Adventures in Babysitting,” appearing in the Oscar-nominated, Clint Eastwood film “American Sniper,” Universal’s “The Little Rascals Save the Day” as Spanky, PureFlix Cinema’s “Woodlawn,” and Freestyle Digital Media’s “Redemption Road.” On the television front, Jet boasts an extensive list of credits including “CSI: Crime Scene Investigation” [CBS], “Hot in Cleveland” [TV Land], “Marry Me” [NBC], “Grey’s Anatomy” [ABC], “Austin & Ally” [The Disney Channel] and “Black-ish” [ABC]. He has also lent his voice to several animated projects over the years, including series regular roles for both Nickelodeon’s “Shimmer and Shine” and “Bubble Guppies,” as well as Amazon’s Emmy-Nominated “Stinky & Dirt.” He has also been featured in several episodes of Disney’s “Special Agent Oso” and “Pickle and Peanut.” Jet has garnered six nominations from the Young Artists Awards, the most recent being in 2016 for Best Performance in a Feature Film – Supporting Young Actor (13 and Under) for his work in “Woodlawn” and Best Performance in a Voice-Over Role – Young Actor (11 and Under) for his work in “Bubble Guppies.”

Born and raised in Nashville, Tennessee, Jet has been entertaining audiences since he could walk. His parents owned a restaurant that hosted live music and dinner shows, and some of his first steps were across their stage with a microphone in hand. He and his family currently split their time between Tennessee, Missouri, and California. When not acting, he loves to hang out on his family’s farm, ride horses, go fishing and spend time outdoors. He is also active in sports, playing soccer, basketball, and golf, as well as perfecting his skills in Kenpo Karate, where he holds a purple belt. He also spends a lot of time playing his guitar and writing and recording music. You can check out some of his most popular covers on his YouTube channel.

On the charity front, Jet has become an avid supporter of The Ryan Seacrest Foundation, a non-profit organization dedicated to inspiring today’s youth through entertainment and education focused initiatives. One of RSF’s first initiatives was to build broadcast media centers, named Seacrest Studios, within pediatric hospitals for patients to explore the creative realms of radio, television and new media. Jet consistently visits these studios across the country and has raised over $15,000 towards building more of them.