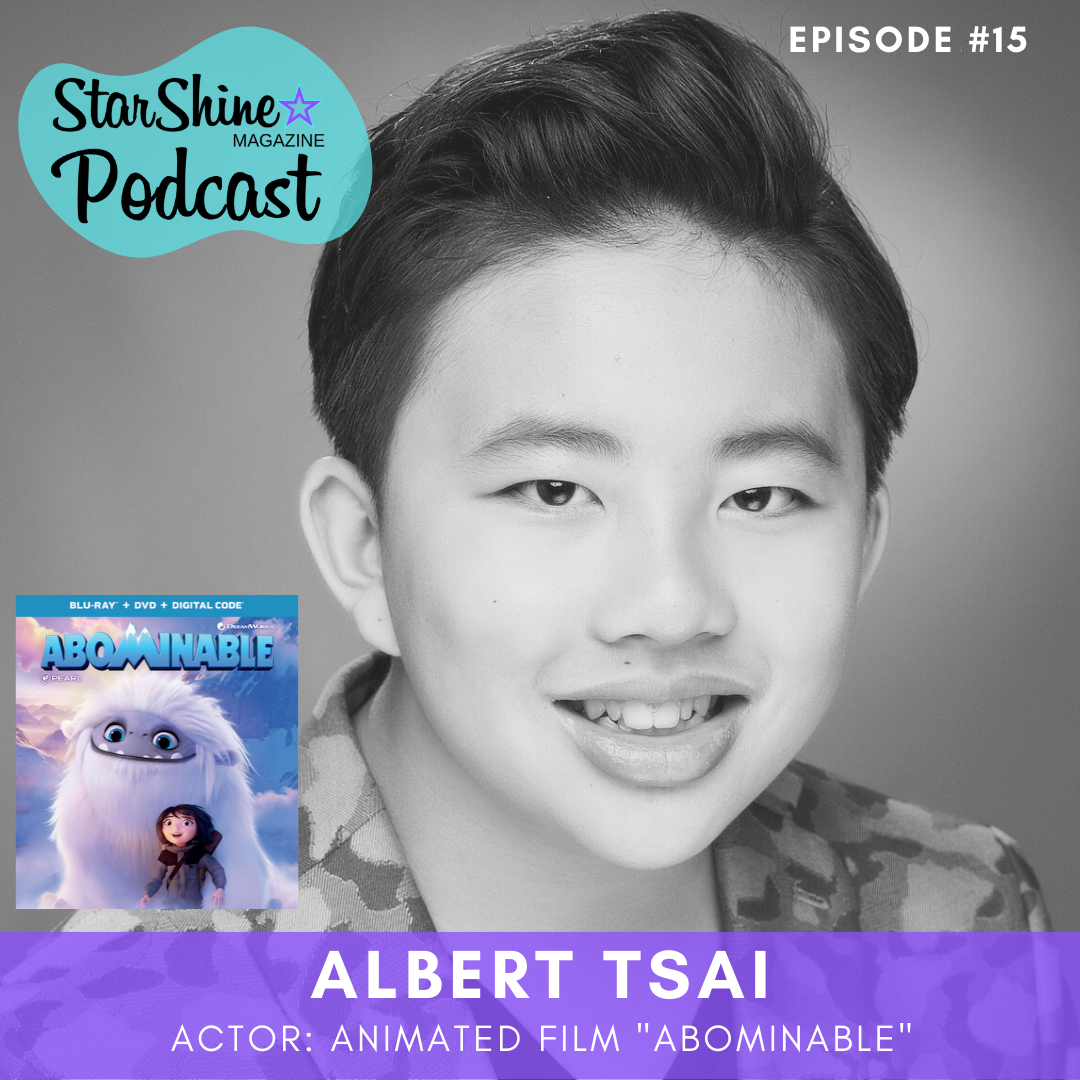 In episode #15, Sandy Lo interviews star of Dreamworks’ animated film Abominable, Albert Tsai. The actor discusses his favorite scene from the movie, the process of being a voice actor, and season 2 of Coop & Cami Ask The World on the Disney Channel. Abominable is now available on digital and coming December 17th to DVD with bonus features.

Thank you so much for being on our podcast today.

Thanks for having me.

I watched Abominable and I loved it.

Tell us about your character in the film.

I play Peng. He’s this super fun-loving, energetic, and carefree kid, who really becomes best friends with Everest. They share this sort of brotherly bond after they meet and go on this crazy adventure all over China. He grew up with Yi and Jin in their apartment complex in this big city and he is always looking for a playmate and he’s super playful. He’s really sort of the optimistic character in the group. He looks at everything as another adventure. He jumps right into it and I feel like when everyone else is pretty much ready to give up, he’s always there ready to continue.

Yeah, definitely and I do feel like Everest is his spirit literally.

It’s very different than how you would film for live-action because it’s just you in the booth and not with any of the other actors. You’re just with Jill [Culton], our amazing director. It’s a really different process because you have to imagine everything. You don’t get to see anything. Nothing is animated yet when you record. You really just have to imagine all of the setting, and all the special effects, and everything else that your character is doing and thinking, and the portrayal of that through your voice. You really don’t have anything to go off of, but I feel like that allows more creativity when you’re recording as well. We sort of were able to ad-lib and change up the lines a bit and really collaborate on the creative process with Jill and the team.

That’s awesome. Did you get to work with any of the cast at all or meet them at the premiere or anything like that?

Yeah, we did do a few recording sessions together. Chloe, Tenzing, and I. So those were really fun and more like traditional acting. Then, of course, we did the press tour with the rest of the cast as well.

What’s your favorite scene in the movie?

My favorite scene in the movie… I really love a couple. The blueberry scene is one of my favorite scenes and the Leshan Giant Buddha as well. And the cloud koi fish near the end of the movie when we’re climbing Mount Everest.

Yeah, that was a cute scene. You’re also on the Disney Channel show Coop & Cami Ask The World. I think season 2 just began?

Yeah, season 2 is airing right now every Saturday at 10:30 am on the Disney Channel.

Awesome. What can we expect from this season?

So there are just a lot more fun episodes. You get to see some more of my character Fred and his personality sort of develops and yeah. There are a lot more crazy episodes. We have a fun Christmas episode coming up and we were actually picked up for 10 more episodes as part of season 2 so that’s pretty exciting. We’ll be going back to film that in the new year. Yeah, a lot of exciting things.

That’s really cool. When you’re not acting what do you like to do in your spare time?

I’m sure you get to do a good amount of it with your acting. And where can we find you online, on Instagram and all of that stuff?

Awesome. Well, thank you so much for speaking with me. It’s a pleasure to have you.

Thank you! Thanks for having me.

From the studio that brought you How to Train Your Dragon, this heartwarming and humorous story follows teenage Yi (Bennet) as she encounters a young Yeti on the roof of her apartment building in China, she and her mischievous friends, Jin (Trainor) and Peng (Tsai), name him “Everest” and embark on an epic quest to reunite the magical creature with his family at the highest point on Earth. But the trio of friends will have to stay one step ahead of Burnish (Izzard), a wealthy man intent on capturing a Yeti, and zoologist Dr. Zara (Paulson) to help Everest get home. Heartwarming and a visual masterpiece, “ABOMINABLE is a movie for all ages with laughter and life lessons and a little bit of wonder thrown in” (Allison Rose, Flick Direct).