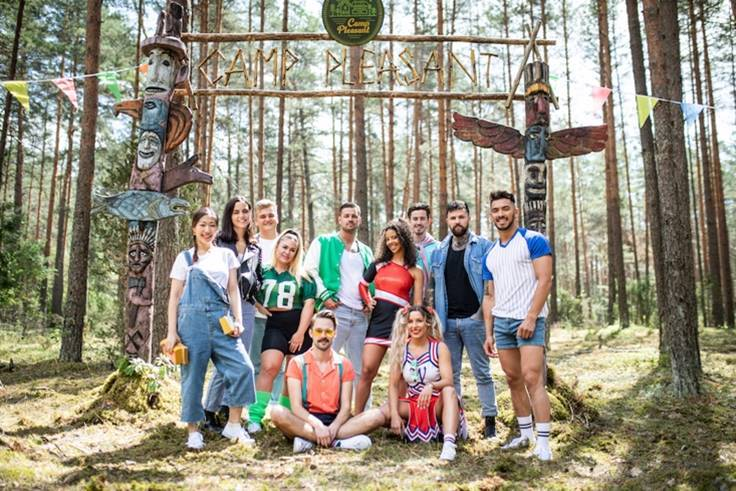 The CW’s new reality competition series Killer Camp premieres tonight at 9pm ET. 11 British contestants think they’re part of a fun reality series called ‘Summer Camp’, but it isn’t until they arrive on the campgrounds that they find out each of them will be bumped off by a fake serial killer.

The contestants will receive challenges that will earn them money, but at the end of each day, one of them will be chosen to be killed off while series host and comedian Bobby Mair describes the gruesome, ridiculous fake death over a campfire.

Winners of challenges not only get money, but they receive a clue at who the killer may be. If no one figures out who the killer is, that person wins all of the contestants’ money.

Like any reality series that puts a group of people together, Killer Camp‘s contestants form bonds and flirtations, which will add to the drama.

For fans of campy horror, literally, this show will be a fun time!

In The CW’s new series KILLER CAMP, 11 British strangers are shocked to discover they are not going on a fun new reality show called “Summer Camp’” but actually participating in a horror whodunnit called “Killer Camp.” Each night someone will be ‘murdered’ – and they must determine who the secret murderer is amongst them.

The object of the game is to earn cash while avoiding being killed and therefore eliminated from the game. The murderer will bump off their fellow campers in ever more extreme, hilarious and inventive ways; it’s the job of the innocents to work out who is responsible before it’s too late…The killer will eliminate an innocent every night, assisted by the evil camp handyman “Bruce,” who actually executes the bloody hilarious death scenes. Comedian Bobby Mair takes on presenting duties as Camp Counselor.

Hosted by comedian Bobby Mair and executive produced by Steph Harris, KILLER CAMP is from Tuesday’s Child and originally aired on ITV2.