17-year-old Isabella Blake-Thomas is already an accomplished actress best known for her role as Young Zelena on Once Upon A Time. Isabella has also starred in Kepler’s Dream and appeared on Doctor Who and Midsomer Murders.

Isabella Blake-Thomas recently discussed her role in the film, working with her mother Elizabeth Blake-Thomas, who directed the film, her singing career, and playing a princess in an exciting upcoming Disney+ movie.

How did you get started in acting?

Well, it actually fell into my lap. My mom ran a theater company in the U.K. from the age of 16 and so later when I was eventually born, she was continuing to work in theater and in drama and was head of a drama prep school in the U.K. and so I was just kind of around drama from a very young age. I think after experiencing her acting classes I realized–as a 4-year-old–how much I love being able to play and pretend as a job. So someone suggested that she put me forward for an open audition in the U.K. and it was my first audition and I booked it and from then on everything kind of just dominoed. My mom’s been amazing about, especially in the beginning, was checking that everything was good and I was enjoying what I was doing and I was and I realized I fell in love with it. 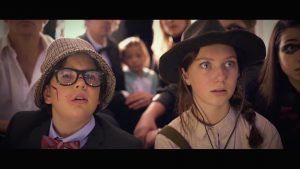 Awesome! As you said your mother is involved in the business and is a director. You guys often work together. What is that experience like?

We do. We have our production company called Mother & Daughter Entertainment. I love working with her. She is absolutely phenomenal because she is so passionate about what she does. I think we’re a great team, not only because we’re mother and daughter, but because we read each other’s thoughts. Like unbelievable that nobody would ever understand. She’ll be thinking something and I’ll know exactly what she’s trying to say before she even knows what she’s trying to say. It’s a great thing on set when you can’t be talking and you’re rolling that someone else knows what you’re thinking. So we’ve always worked well together in that sense. We’re a great writing team as well and I think despite what people think about a mother and daughter clashing, our relationship is so good when we’re not working in entertainment that working and doing what we love just makes it even stronger.

That’s amazing. I don’t think that happens too often.

I’m very lucky with that.

Tell me about The League of Legend Keepers: Shadows.

Well, League is a multiple storyline movie series because The League of Legend Keepers is the league that Sophie and Edison join. Each movie has a different title, so the first one is Shadows and it changes depending on what the content of the movie is about but it will always be The League of Legend Keepers. Essentially we came up with the idea because my mom and I realized that there are no middle kind of young adult-age Halloween movies that weren’t scary or scary enough. There was no middle. There was paranormal or there was Mickey Mouse Goes Trick-or-Treating and nothing in the middle. So we decided that was an untapped market and we wanted to create something for my age at the time, which was about 13 or 14 and even younger when the idea started. We realized that this is what people wanted and so we thought, “okay, a family movie that’s for Halloween so you have a season for it that can be shown every year, but that kids will want to grow up with. As we make more movies, they’ll get scarier. The audience will get to grow up with these characters and be able to relate to them.

What was your favorite scene to film in the movie?

That’s a tough question! I mean any of the action scenes were so much fun! I really enjoyed playing Sophie because she’s an attainable everyday superhero. She isn’t a crazy person with magic powers who is a child prodigy. She is the normal everyday girl who wants to be an archaeologist like her dad. She has some good friends. She goes to school. She has a good family, but yet she can still save the world. So I think any of the action scenes would just a blast to film because I was a normal girl showing people that you can be from any background and still quote-unquote save the world.

I saw on your IMDb page that you have a few upcoming projects. Can you tell us about any of them?

I do! Let’s think…  Well, I play the latest Disney princess on Disney+ in Secret Society of Second Born Royals. That’s set to release 2020, which is very, very exciting. All I can say is that my character is called Princess January and she is your bubbly best friend type character. I’m working on a true story at the moment called Millie, which is about a friendship I have with a 100-year-old woman. We have an incredible actress playing Millie who is called Terry Moore. She was nominated for an Academy Award in 1952 and I am honored to be working alongside her. With our production company, we’re working on a short-form series. Then we’re working on all things for The League of Legend Keepers as well, which is very, very exciting but it’s still a little bit under wraps. 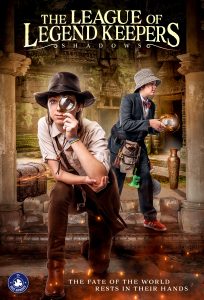 Who has been your favorite person to work with on-camera so far?

So many different people for different reasons because certain actors I enjoy working with because they’re just so friendly and we’ve become like family on set, but there are others that I love because I’ve learned so much from them because they’ve been in the business for so long. So I don’t know if I can pick a favorite. I can tell you who I’ve definitely enjoyed working with. I loved working with Taron Egerton on a TV show in the U.K. called The Smoke. I got to work with Holland Taylor in a movie called Kepler’s Dream, which was great. Working on the Disney+ movie with a great cast as well… That’s been phenomenal. Looking forward to working with Terry on the Millie project. The cast of Once Upon A Time on ABC… That was an incredible cast because they were so welcoming and just kind, and they really made me feel like part of the family.

Julie Andrews and Dustin Hoffman and Emma Stone. Those are the people that I aspire to work with.

You’re also a singer. Can we expect more music from you as well?

Absolutely. Currently, out right now, I have two EPs and a single I’m working on. Oh, and a dance remix will be coming out around Christmas time. I’m very excited about that. Working on new music all the time in the studio. Working on new things for 2020 so there definitely will be new music and eventually working on a full album.

Nice! And will you be touring for that album?

I’m actually talking to a tour manager at the moment. It’s a little bit under wraps, but we’re definitely in conversations about it.

Where can fans find you online?

Well, I have my production company website, which is MotherAndDaughterEnt.com. All of my social media is @Isabella_B_T and I am easily reachable through social media. I have my email open on Instagram so anyone can contact me through that.

Check out The League of Legend Keepers: Shadows now available!