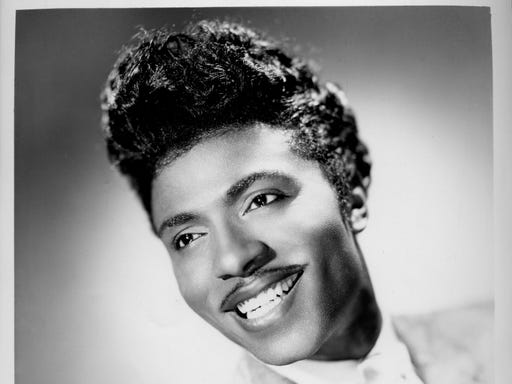 Grammy Award winning, Rock ‘n’ Roll Hall of Fame member, Little Richard, the mastermind behind legendary hits “Long Tall Sally,” “Rip It Up,” “Good Golly Miss Molly,” “Tutti Frutti” and many more, has passed away at the age of 87. Little Richard’s music broke racial barriers and his impressionable style shattered all that was standard. The eccentric star paved the way for other stand-out acts with his unique nature, flamboyant flair and inspiring innovations to culture. With an unmatched career of stellar achievements, the musical giant leaves behind an unforgettable legacy. Little Richard was not only a distinct entertainer but a friend to many in the music industry.

Fellow artists mourn the loss of their friend and share fond memories that have left them forever moved by the Iconic, Little Richard.

“In my book, Little Richard was the king of rock ‘n’ roll. He carried a full horn orchestra and wrote most of his songs. He was the first really crazy rock ‘n roll guy that everybody loved, black or white. I always had a Richard album or two even when I was broke. One of The Jordanaires told me that when he met Richard in the 50’s his face was painted purple. That about says it all.” – Don McLean

“I knew Richard for more than 60 years. He truly was one of the founding fathers of American contemporary pop music, so we all need to tip our hat out of respect for the contributions he made not just the American culture but to the world. RIP Little Richard.” – Sam Moore

“Little Richard and I worked together multiple times over the years. I believe the last time we shared the stage was in the 90’s. When you think about Rock and Roll music, he is one of those at the top. What amazed me the most about him was the great records he made with none of the technology like there is today. He will be greatly missed by all.” – BJ Thomas

“Little Richard was a pioneer in the world of Rock and Roll. He excited audiences with his stage presence and through his music. In an era of James Brown and Elvis, Little Richard still captured millions of fans. I will not forget meeting him on the Celebrity Wheel of Fortune. My family and I send prayers to those who loved him.” – Lee Greenwood

“Little Richard was a Rock and Roll pioneer and his legacy will remain as such. Years ago we had him on as a guest on our Oak Ridge Boys Live from Las Vegas TV show on the old Nashville Network. What a sheer joy he was… backstage as well as onstage. Energy just flowed from him… Rest easy man… you took R&B and turned into ROCK and ROLL!” – Joe Bonsall / Oak Ridge Boys

“Little Richard, known as the “architect of Rock ‘N’ Roll” was one of the most dynamic entertainers in the music business. He was a true inspiration to generations of performers. Thank you Little Richard. Our thoughts and prayers are with you and your family.” – Deana Martin

“I remember, like yesterday, the first time I met Little Richard. It was down in Joshua Tree outside of L.A. on the set of a Taco Bell shoot. There was a freak snow that morning, so he and I waited and talked all day. We wound up getting to work the next day and from then on, we were good friends. He asked me to honor him by performing his songs on a television special, called ‘Celebrate The Soul Of American Music.’ I remember him sitting on the front row, smiling that big electric smile of his and clapping his hands. He called on my birthday and the last time I talked to him was to wish him a Merry Christmas. I sure will miss my friend. He was a sweet guy and a good pal. God rest his soul. “A-wop-bop-a-loo-bop-a-wop-bam-boom!!” – T. Graham Brown

“I’m so sad to hear of the passing of the fabulous, flamboyant Rock Icon, Little Richard. He came into this world breaking barriers with style and music! He was so sweet, so much fun and truly, bigger than life! I’m so glad I got to know him! I loved him! I know he’s still breaking barriers, Onward and upward!!! Rock on in peace Little Richard.” – Deborah Allen MacDuffie

“Several years ago I was at my accountant’s office when I heard this commotion in the front office. When I walked out into the lobby I saw Little Richard entertaining the secretaries. His appointment was right after mine. One of the biggest shocks in my life was when Little Richard said to me, “I know who you are, Tim. I’ve been following your career.” That was a surreal moment for me! He then sent his assistant to his car and presented me with a Bible. He told me wherever I do a show, make Jesus proud. It’s the best advice anyone has ever given me. To most of the world Little Richard was a bigger than life entertainer (and he was that for sure), but to me he will always be that kind soul who encouraged me in my music and who cared enough to talk about my salvation.” – Tim Atwood

“One of the best old school Rock ‘N’ Roll singers of all time. He influenced so many people in his time. We lost another legend in the music industry that will never be forgotten. RIP Little Richard” – Shane Owens

“I am sad to hear the passing of the Iconic Little Richard. His charismatic showmanship and his flashy piano playing will forever be remembered. Prayers up to one of the founders of rock and roll!” – J.D Shelburne

“It’s never a good time to lose a staple in music such as Little Richard, but this is a hard loss during these times. Being the founder of so many new and experimental music genres during his heyday, Little Richard added so much to the music scene and entertainment as a whole. I know his fun and lively spirit will live on through his hits like “Tutti Frutti” and “Whole Lotta Shakin’ Goin On” even as he’s gone. My thoughts and prayers are with his friends and family during this time” – Paige King Johnson

“Thanks to Little Richard for setting such a great example: Be yourself!” – Carrington