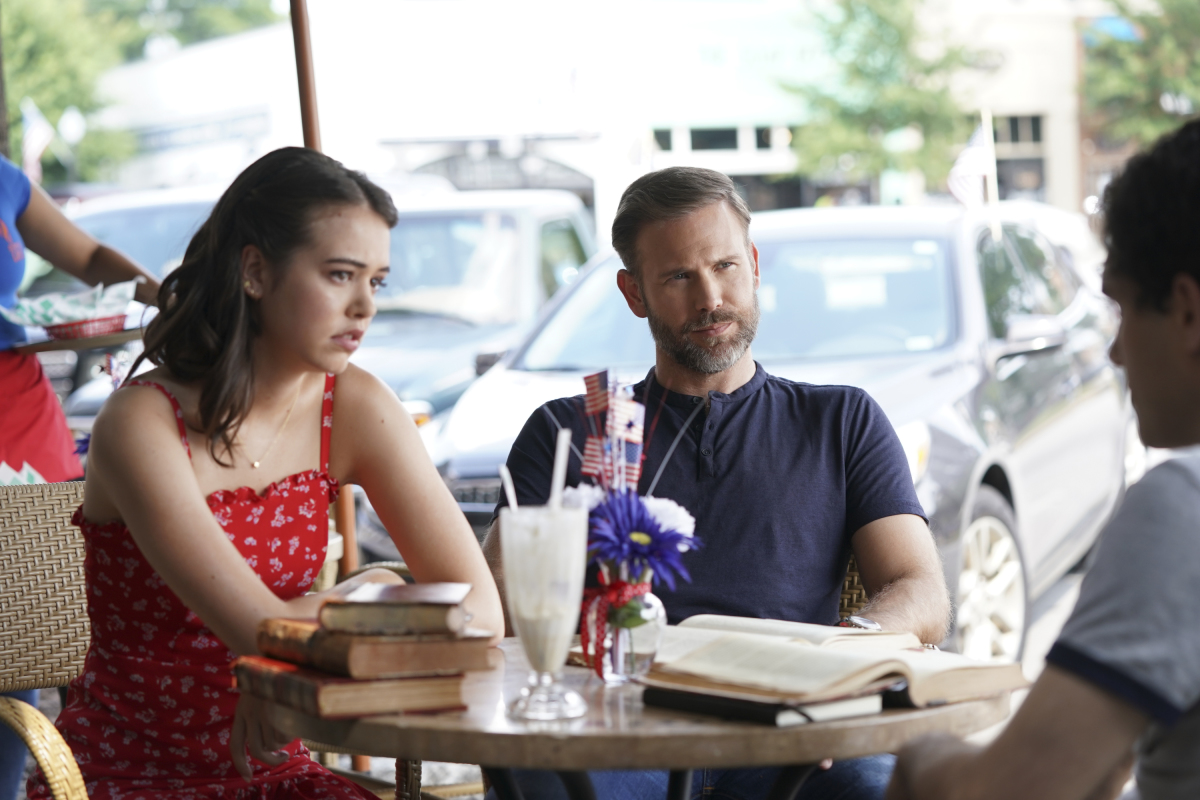 The second season of Legacies premieres Thursday, October 10th at 9/8c on The CW. While Hope (Danielle Rose Russell) tries to figure out a way out of Malivore with no help from Clarke (Nick Fink), life goes on in the rest of the world completely unaware of her existence, let alone her disappearance.

The rest of the characters in Mystic Falls are enjoying–or trying to enjoy–their summer vacation. MG (Quincy Fouse) is in Nashville with Kaleb (Chris Lee) and his family.  There doesn’t seem to be any real plot there, except to provide some lighthearted banter and a potential love interest for MG. Doesn’t MG already have too many potential love interests? There was the teen Medusa that turned him to stone from last season. Aside from that, she seemed nice! I would have liked her to stick around. Then there is MG’s never-ending crush on Lizzie Saltzman (Jennie Boyd) and who knows if that will ever pan out …

Speaking of Lizzie, she is spending the summer visiting her mother, Caroline Forbes — Don’t get your hopes up, no sighting of Candice King! We only see Lizzie in this episode thanks to her witchy holographic communication with her sister, Josie (Kaylee Bryant).

While the twins continue to wonder what the ascendant is for, Josie worries about her father, Alaric (Matthew Davis). In the season one finale, Alaric was voted out as headmaster at the Salvatore School and he appears to be a bit depressed, as his growing beard seems to symbolize.

On top of being out of a job, Alaric is confused about what happened to Malavore since it seemingly disappeared out of nowhere.

As for Landon (Aria Shahghasemi), who doesn’t remember a thing about his girlfriend, he spends the summer feeling as if something is missing in his life. Duh! Even an evil void erasing someone from existence can’t erase part of your life completely. Something has to feel off, right? Especially for Landon, Malivore’s son. He does utter the word “hope” a couple of times throughout the episode and each time, I held my breath thinking, “Did something click?”

Landon devotes his time to Raphael (Peyton Alex Smith) who is still stuck in wolf-form thanks to the ring Hope gave him last season.  We were definitely missing Raph’s face this episode. Hopefully, we see it soon! Outside of his companionship with his wolf-friend, Landon develops a bond with Josie over the summer.

While I won’t reveal any spoilers, I will say that although this episode was predictable, it was needed to get to other plot points.  The episode summarized where the characters have been and what their struggles are in order to catch us up and open up a season full of new issues, with some promising new romances along the way.

Head writer Julie Plec, who directed this episode, is just getting warmed up.

Tune in Thursdays at 9/8c on The CW or stream it the next day on The CW app, website, or OnDemand.