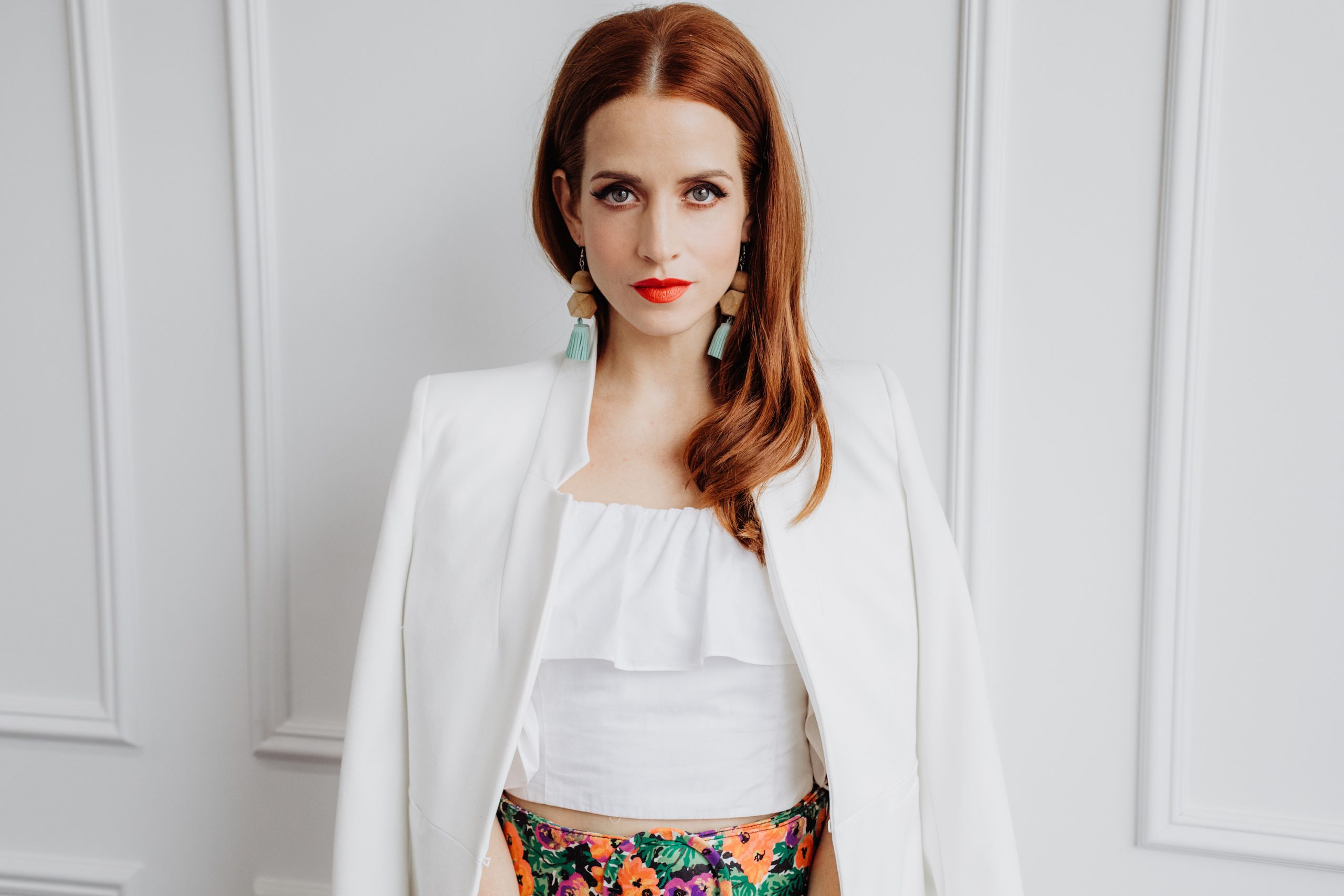 The highly-anticipated Netflix series, V-Wars is now available for streaming! The new vampire-driven series stars The Vampire Diaries’ Ian Somerhalder, but surprise, he’s not a vamp this time. Instead his best friend, Michael Fayne (Adrian Holmes) and Michael’s girlfriend, Danika (Kimberly-Sue Murray) have been infected.

Kimberly-Sue Murray was born in Quebec and is now based in Toronto, which provides plenty of opportunities for the up & coming actress. Her list of credits includes the popular series Shadowhunters, Reign, and My Perfect Romance.

Kimberly-Sue Murray and I chatted earlier this week about all things V-Wars and our shared love for True Blood‘s Eric Northman (Alexander Skaarsgard). Now, I’m even more excited to get bingeing and meet Kimberly-Sue’s character Danika!

How excited are you about V-Wars coming out?

I’m so excited and I’m nervous.

I’m sure that everyone’s going to love it.

Are you a big fan of vampire series and stuff like that?

You know what? I totally am. I grew up watching Buffy and I was a big fan of all of the Twilight movies and True Blood. Playing a vampire was definitely on my list of roles to play. I just didn’t think it would happen so fast.

Yeah, I’m a big fan of all of those things. So, I’ve been following along on Ian Somerhalder’s Instagram for some time now about the show.

Wonderful. Did you know about the books? Have you read the comics?

I have not. I just found out that it was a comic first.

Yeah, it was a comic first and then Jonathan Maberry has an anthology… basically, it’s a bunch of short stories about this vampire war. I started reading it when I got cast and it’s so good. Hopefully, fans will be able to enjoy the books.

For those people who don’t know about the show yet, can you describe what it’s about to them?

It’s about this viral outbreak basically. There’s this ancient pathogen in the glaciers and with global warming, that melts and it sort of leaks. Then whoever has the genetic makeup turns into a vampire or what they refer to as vampires. So no one really knows who’s safe, but people are turning at a rapid rate. It becomes a war between humanity and these bloods and everyone who’s stuck in between, including Dr. Swann (played by Ian Somerhalder), who is this doctor looking for a cure because this is a disease and therefore there should be some sort of cure. So that’s what it’s about.

Tell us about your character.

I play Danika Dubov. She and her sister Mila (played by Laura Vandervoort) had quite a tumultuous upbringing. There’s quite a bit of tension between the two sisters and Danika–because of her relationship with Fayne (played by Adrian Holmes), who’s Patient Zero, turns into a vampire. She’s kind of a little self-centered, likes to have fun, power-driven, and when she turns into a vampire all of that is kind of heightened.

Mila, on the other hand, has a very strong moral compass and wants to do the right thing and Danika turns Mila into a vampire. So the rivalry… things just blow up. It was a fun character to play and at first, we didn’t know where it was heading so I was just waiting for the next script. Like “ooh, this is fun.” I was on the edge of my seat for sure.

What was it like working with the awesome cast and crew?

Ugh, amazing! I was a little apprehensive at first because every time you start a new project, it’s just a whole new crew and cast and it takes a while to get to know everyone and to find the groove. But working with Ian [Somerhalder], he’s just so frickin’ amazing and welcoming. He’s the kind of guy who knows everyone’s name and he shakes everyone’s hand and he gives people high-fives. He’s so involved and the showrunners were always there talking to us about the characters. We just had a really good team and it was just really nice.

What sets V-Wars apart from all of the vampire movies and TV series out there?

Well, I think the biggest thing is that this show is grounded in reality in the sense that we’re not talking about ancient vampires that glitter and they have their shit sorted. This is a disease. People are sick and they don’t know what’s going on. Even when we were shooting, we were like, “What are the rules of the world?” I know what I’ve seen in True Blood and Twilight. That’s what I know of vampires in terms of speed and their abilities, drinking blood…

I don’t want to say too much, but Danika’s different than Michael [Fayne] in the ways they feed. So it’s a disease and there’s potentially a cure, but we’re not sure, and is this for life? Is it temporary? When you’re a vampire, do you lose who you were originally or is there still that sense of humanity? Because you have to feed. And then there are humans who are chasing you and trying to eliminate you. It’s really that question of who you are today may not be who you are tomorrow and how you bridge that.

Who is your favorite vampire of all time?

Oh yeah, he’s one of my favorites too.

He was such a bad guy…

Yeah, but so handsome.

Bill couldn’t hold a candle to him in my eyes.

True Blood was a favorite show of mine until it got weird with the fairies at the end. Then I was like uhhh… stick to the vampires!

Yes! It was getting too weird.

I shouldn’t talk ill about fairies because I played a fairy in Shadowhunters. [laughs] I went from one mystical character to another, which is nice.

How did you get into acting?

I went to theater school. That was where it all started for me, but I wanted to be an actor since I was about 9. I come from a very small town in Eastern Quebec. A French Canadian community. There was no acting programs, no opportunities, and I remember I just wanted to go to Hollywood.

I asked my mom when I was 11 to cold call this agent in Hollywood and I can’t believe I had her do that and she did! The agent was so sweet and was like “oh, maybe she should get in some experience with some headshots.” I had nothing and my mom did everything for me. We would find these casting calls in newspapers or online and we would drive eight hours for it. We would line up with hundreds and hundreds of girls to audition for a small part in a French Canadian series.

Then I wouldn’t get the part and I would cry and drive back. That’s always been the dream and she [my mom] always thought it was a phase and that I would grow out of it. And I did not. So I went to theater school and after that, there was this center in Toronto called the Canadian Film Centre and they had a great actor’s conservatory. That was really how I got into the Toronto market. With Netflix shooting a lot in Toronto and a lot of American productions coming here to shoot, that’s how I got cast in Shadowhunters and V-Wars after that.

Aside from V-Wars, do you have any other upcoming roles that you want to share with us?

Both projects I’m working on right now I can’t talk about because they haven’t been announced. So my lips are sealed, but fun stuff happening!

What would you like to say to everyone that will be tuning in to V-Wars this week? I’m sure we’ll all be bingeing it.

Well, let’s binge it together. Let’s talk about it. Let’s share it. I can’t wait to hear what people think. Also, the feedback will be heard and if we get a second season… the fans are a huge part of movie-making and making a series. Thank you for watching!

Have you started watching V-Wars? What do you think of Danika? Leave a comment! (No spoilers please)