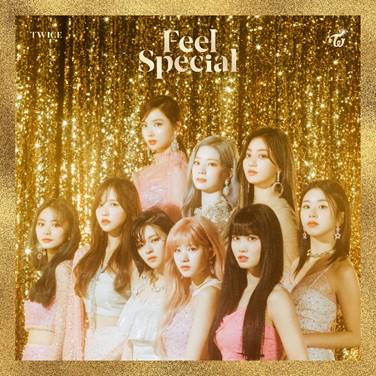 The 9-member K-Pop girl group, TWICE, released Feel Special, earlier this week, making it their 8th EP release. I’m catching up on the K-Pop genre and am upset I’m just now discovering these girls. They have sold out shows at LA’s The Forum and Newark’s Prudential Center as well as being featured on Billboard’s 21 Under 21 in 2017.

Feel Special is comprised of 7 killer danceable pop tracks with sweet vocals and lyrics that weave in and out from English to Korean flawlessly.

The title track “Feel Special” kicks off the EP and reflects the highs and lows TWICE have gone through since their rise to international fame four years ago. The tune is so catchy, all you’ll feel is high listening to it! It would make the perfect jam to listen while getting ready for a night out with the girls.

“Rainbow”, penned by group member, Nayeon, is mostly in Korean, but the positive vibe still shines through without understanding the inspirational lyrics. “Open a new road behind the clouds/Walk in the wide sky where your path will unfold,” one of the lines translates to in English.

“Get Loud” is like a cheerleader’s anthem that’s easy to clap along to get a crowd hyped. Member Jihyo contributed lyrics to the track.

Dahyun wrote the lyrics for “Trick It”, a track with an infectious hook and infused with some pop-rapping both she and Chaeyoung are known for.

“Love Foolish” is about the fine line between love and hate. The song was written and composed by Sim Eun Jee with TWICE’s Momo adding her own unique touches to it.

Slowing down the EP is “21:29” which is a tribute to their fans and a direct response to all of the letters/messages they receive from them. It also marks the first song all nine members wrote together.

The last track on Feel Special is the Korean version of the previously released, “Breathrough”. The song is an encouraging affirmation to keep pushing through. The group melodically chants, “Say say, don’t give up!”

Other credits on the Feel Special album include Melanie Fontana (BTS’s “Boy With Luv”), JQ (EXO’s “Tempo”), Ryan S. Jhun (Red Velvet’s “Dumb Dumb” and EXO’s “Love Me Right”), and Sim Eun Jee, who worked with TWICE in the past on “Yes or Yes” and “Knock”.

We love Feel Special so much that we’re making the title track one of our songs of the week! Scroll down to listen to the album!

“Our 8th mini album Feel Special is a very meaningful release for all of us,” said TWICE in a group statement. “We wrote these songs for our fans with the hope to encourage and empower them to have an open heart with themselves and each other. We really hope that this album makes them Feel Special!”