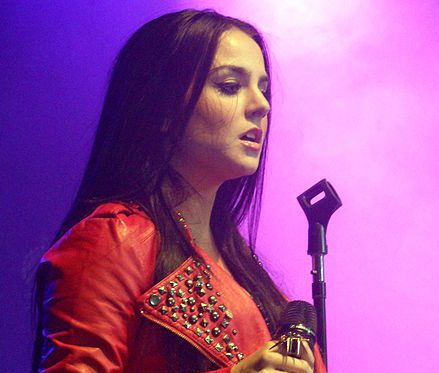 R&B/Pop star JoJo, the powerhouse vocalist responsible for hits “Leave (Get Out)”, “Baby, It’s You” and “Too Little Too Late” is creeping back onto the music scene after some much needed normalcy.  At thirteen, she was hitting the Billboard charts, and now at twenty-one, she’s ready for more with new single “Disaster”.

I caught up with JoJo when she was visiting my new hometown of Nashville for local radio DJ, Intern Adam’s Birthday Bash at the club, Mai.  Dressed in knee-high boots and a corset, JoJo stepped on stage proving she is no longer a girl, but indeed a woman packing the same talent she always did.

I skipped out on Intern Adam’s party early so JoJo and I could chat without all the screaming fans at Mai, who were eagerly awaiting Karmin’s performance.  Of course, I got to wish Adam a happy birthday first, who was “hollering and swallering” with the crowd all night.

After getting lost—not surprisingly—I made it to the lobby of the hotel around 1am to a patiently waiting JoJo, who had been up since four am, and had an early flight the next morning.  Like the first time I met her back in 2004, JoJo was eating popcorn.  It was one of those full circle moments, I guess.  Or just pure coincidence, more likely.  Read on for the goods on what’s coming up from Miss JoJo.

Sandy Lo:  First, how are you?

Sandy Lo:  Good.  So since The High Road, which was the last time I interviewed you, what’s been new?

JoJo:  What I did after The High Road, most importantly, was finish high school.  My mom made sure that I prioritized and put my education first.  I resisted that.  I wasn’t that keen on it, but toward the end of my high school experience, I was actually really thankful that I did it.  So I really became academic and went through the college application process and had that conversation with myself, my family and my close team members and decided that I was going to move to L.A. to focus on recording an album and put off school for a while.  Then I lived in Boston for about a year—got a condo in Southey—from 18 to 19.  I still have it, but I’m renting it out.  At 19, I moved to L.A.  For the past few years, I’ve been working on music nonstop and kind of just developing a sound—and writing through my life.  Writing through the good times, the bad times, the weird times, the stupid times.  And just really finding out who I am through music.

Sandy:  Very cool.  Now let’s talk about “Disaster”.  Did you write that song?

JoJo:  I wrote it with my close friend Gino, yeah.

Sandy:  What would you say that the song is about?

JoJo:  It’s definitely about young, crazy love.  About something that was really important to you and something that…  Sometimes when you’re in love, especially when you’re young, you’re totally wrapped up in it.  When it starts to go downhill, it’s completely devastating.  It can feel like a disaster.  It comes out of nowhere sometimes.  So that’s what it’s about.  I can definitely relate being caught up in something and you don’t even know how it got so bad.  And then you just feel you’re in the eye of the storm.  But what I love about the song is that there is kind of redeeming feeling at the end.  Just because a relationship doesn’t turn out the way you envisioned it, there is so much more to life than just a boy.

Sandy Lo:  How would you say you’ve grown—I mean obviously you’ve grown a lot since the beginning of your career when you were thirteen and “Leave (Get Out)” came out, but how has life influenced you as an artist?

JoJo:  Hugely, in every way.  Just from living on my own and not really having to answer to anyone.  You know, that’s what happens when you turn eighteen and go off to college, but especially after that college time and you’re on your own and finding yourself.  I kind of got to do that, especially in L.A.  Just having a great circle of friends; having good times with my girlfriends, and having them to help me through.  Or going through a fun, crazy relationship that turned horrible and destructive.  Being part of the dating scene and things like that, and being comfortable being single.  All that has really influenced my music, as well as things that go on in the industry.  And that oppose to just being from a small town in Massachusetts and finding my place in this big city of L.A.  So all of that is really inspiring to me.

Sandy Lo:  Now to flip it, how would you say being an artist at such a young age has had an impact on your life?  You know, growing up in that kind of spotlight…

JoJo:  I’m sure it had an impact on the person I am, and who I’m growing into, but I don’t know anything different.  I mean, I’ve been singing forever.  I got signed when I was twelve.  So my entire teenage life and now my life as a young woman has been kind of in this.  But what’s cool is that I got time to be a regular person.  My mom made sure I was very acquainted with reality.  I was very close with my family and I really had a nice New England upbringing, I think.  Growing up in this industry just made me comfortable around adults and maybe made me grow up a little quicker I guess.  But I’m not jaded.  I didn’t see like drugs and stuff like that because my mom was already right by my side until I was eighteen.  So I feel like I’m a little naïve to certain things actually because my mom kind of put me in a bubble.

Sandy Lo:  But that’s good.  Your parents should protect you.

JoJo: It is good.  I’m thankful for that.  Even things that my friends who grew up in Beverly Hills were exposed to from such a young age because they had access to everything and were so rich.  They went out to clubs at a young age.  I didn’t do that, so I’m thankful.

Sandy Lo:  Awesome.  So when can we expect the new album?

JoJo:  What I’m saying as far as that is, support the singles.  “Disaster” and we’re moving onto a second single soon.  We’re looking to release the album this year, but I’m still in the studio so the album keeps taking a new shape.

Sandy Lo:  Are you working with any new producers?

JoJo:  I am, but I want to stay tight-lipped about that. [Laughs]

Sandy Lo:  Gotcha!  In the past you’ve had a pop/R&B style.  Are you going to stay with that or are you moving more toward dance?

JoJo:  I’m not really venturing into the dance movement.  I love records that you can dance to and I love the electronic/house sound.  However, I don’t think that is really being true to myself.  So I want to stay in the pop realm, but I want it to be infused with all the things that I love.  From neo soul to hip-hop to rock—I mean all different things.  The record is younger and more fun and cooler than anything I think people have heard from me before.  It’s edgy, but it’s not—I used to describe the sound as pop with an anger management problem, but it’s not angry anymore!  The way the album has evolved…I want to do interesting, cool stuff.  I think that’s more the direction I’m going.

Sandy Lo:  Very cool.  Tonight you performed at Intern Adam’s Birthday Bash here in Nashville.  How did you get involved with that?

JoJo:  The station [107.5 The River] reached out.  Adam has been really, really sweet about following my career and giving me props, so I said of course!  And I LOVE Nashville!  I just texted some of my friends and said we need to take a weekend trip here and come explore.  The music, the culture is so rich.  The city is thick with energy.

Sandy Lo:  It’s nice, especially because most celebrities who live here get to lead a normal life.

JoJo:  Yes!  It’s a really dope place.  So, I was thrilled.  There was just a great energy inside the club.

Sandy Lo:  The crowd reacted to you wonderfully!  They were screaming like crazy.  Outside, there was this guy singing “Leave (Get Out)” at the top of his lungs. [Laughs]

Sandy Lo:  What’s it like to know your fans have stuck with you all these years?

JoJo:  I can’t even express how thankful I am.  I feel like I don’t even…  What did I do to deserve such loyal fans?  It’s just SO nice.  It’s just amazing and humbling to know people believe in me so much.  And that people are thinking about the long term, and see my same vision for myself.  I’m really appreciative for that.

Sandy Lo:  Well, that’s it for the interview.

Sandy Lo:  No problem.  It’s great to see you and interview you for the fourth time. [Laughs]

JoJo:  You too, and I’m sure there will be a fifth.