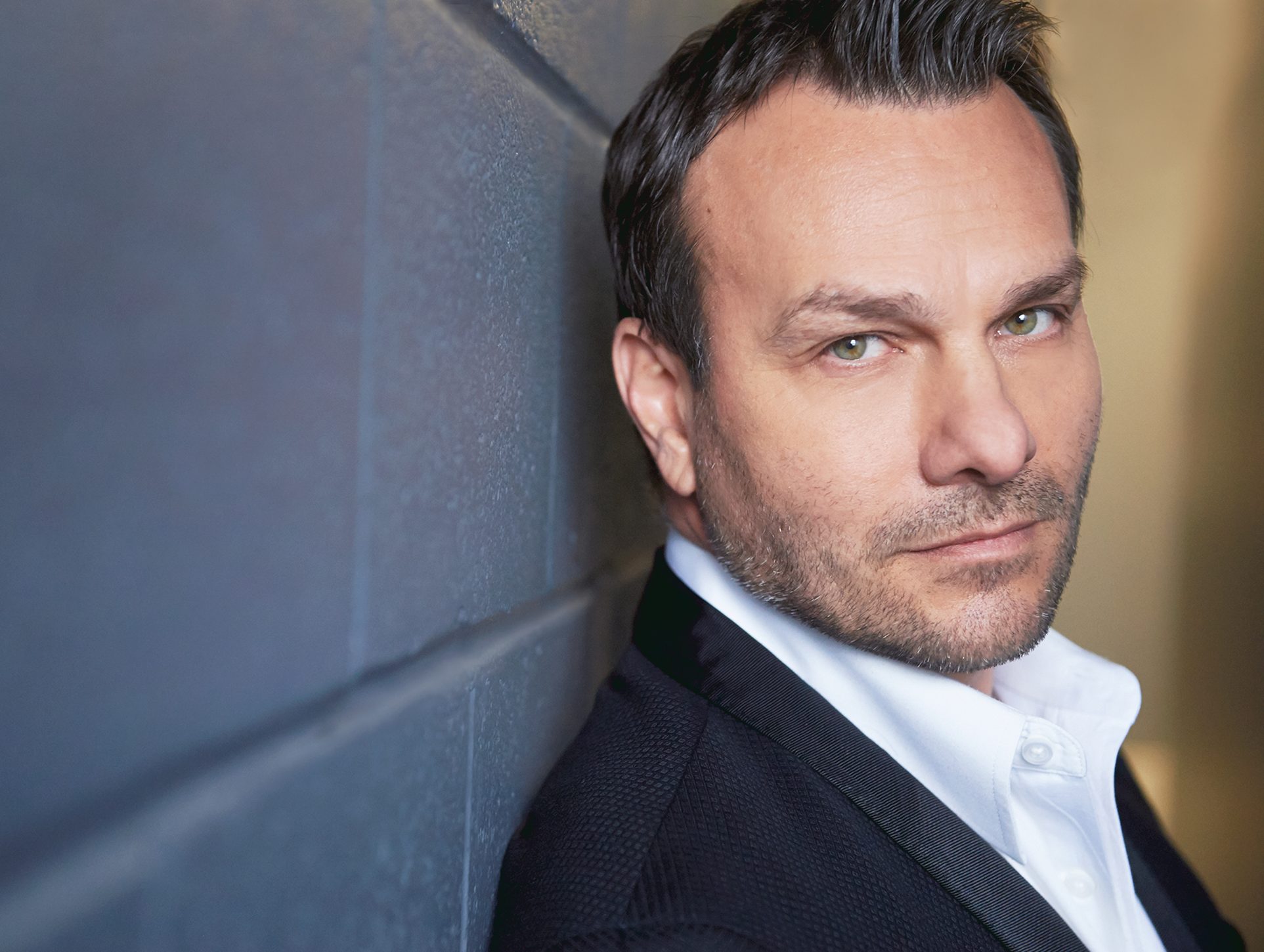 Jeff Teravainen, who began his career as the lead singer of the band The Life, is best known for his role on SyFy Channel’s Dark Matter and Hallmark’s Flower Shop Mystery: Snipped in the Bud with Brooke Shields.

Aside from his onscreen roles, Jeff is a popular voice actor that lends his talents to announcing sporting events like The Olympics, The World Cup, and Hockey Night in Canada as well as videogames like Resident Evil: Outbreak.

Earlier this year, Jeff appeared in the role of Gerald on the Hulu original series, Utopia Falls – a dystopian teen musical drama that questions the norms of society.

We asked Jeff about Utopia Falls, the transition from music to acting, and if he was ever starstruck by one of his co-stars.

Watch the trailer for Utopia Falls!

Hi Jeff! Hope you are safe and well. You started out as a singer and musician. What made you switch over to acting?

Thanks, just keeping my head down at home and working in the home studio a lot. I lived for music. Every car ride, shower, walk, I was writing, etc. I truly lived for the music and it was magic for a while. And while we got close on a few occasions to really hitting something big, the business was full of snakes, and unfortunately, I encountered one too many.

After a while I just had had enough. Shame. I had always wanted to act, but figured I would do it once we got things going musically.

Did acting come easily or did you find there was a transitional period?

I was a train wreck at first. I am sure some would say I still am! I got scouted for modeling which led to a commercial for the Canadian retailer brand Zellers. I was so nervous that I got cut. But I liked what I saw, and realized I needed to learn, so I started taking lessons. I still know there is so much more to learn, but it is so satisfying when things go well.

Out of all of your roles, which one was the biggest challenge?

They all present you with something. But I will never forget this fight scene I had to do on a show called XIII.

Stewart Townsend is such a great guy to work with. Very talented actor. We had to do this quick little fight with a machine gun. Although it was certainly tricky. I was terrified of messing up, so I really practiced a lot beforehand.

Thankfully John Stead, THE legend was the fight coordinator and he and his team really got me through it. Great bunch. I got to work with John again on Dark Matter. Lovely guy! But that was certainly a challenge for me.

Were you ever starstruck by any of your co-stars?

Usually I am pretty good. The only time that really comes to mind was doing Snipped in the Bud with Brooke Shields. She is absolutely down to earth and a real team player on set.

We got on very well right from the start. Because we were filming in a very remote place, we all hung out a lot off set too. So mostly it was cool. But you see, as a kid I had this huge crush on her, and I remember having a scene by the courthouse steps with her and she was yelling at me face to face staring into my eyes.

All of a sudden, my brain switches on saying “Dude, that is Brooke Shields yelling at you!?!?! Are you getting this!?!?” Had to give my head a shake. She really is an icon, but you would never know it the way she is.

Getting into Utopia Falls, what can you tell us about your character for those who haven’t seen it?

I love Gerald. He is a great father and one of the leaders of this futuristic society. Widowed, he has worked and raised his daughter Aliyah. That is pretty much it. But we see he has secrets throughout the show, and when his daughter gets in trouble, his loyalties will be tested.

Why do you think a show like Utopia Falls is needed right now?

For pure entertainment, it is great. There are also many societal messages throughout. I told the creator, RT Thorne, he had a Pixar-like show. There is something for everyone in it. It is sci-fi, but there are also music and dance elements.

Can we expect a season 2?

That is a great question for Hulu!! But fingers crossed.

What have you been doing to keep a healthy mentality during this quarantine?

As someone who craves my gym routine, it has been a drag, but I have been making the most of what I have. The funny thing is, I tried to jump rope … man, that is harder than I remember.

I also tore my calf badly doing it – or overdoing it. Hopefully, I can get things back to the way they should be quickly, as I am starting some very physical roles.

TOP secret unfortunately, but I can say they are absolutely amazing. One is like a dream. I was supposed to shoot a nice little part in a feature, but that is, of course, on hold.

There are the other two top secret ones. Thankfully, I have been voicing lots of TV commercials from my home studio. We also just finished an upcoming show for the Science Channel. I am narrating Secrets in the Ice and this is something I would watch, so I’m pretty pumped about it.

What’s one thing not many people know about you?

I co-wrote a Christmas song that still plays on the radio, and that I used to be in a band with the guitarist from Our Lady Peace. In fact, they opened for my other band. We are still friends.