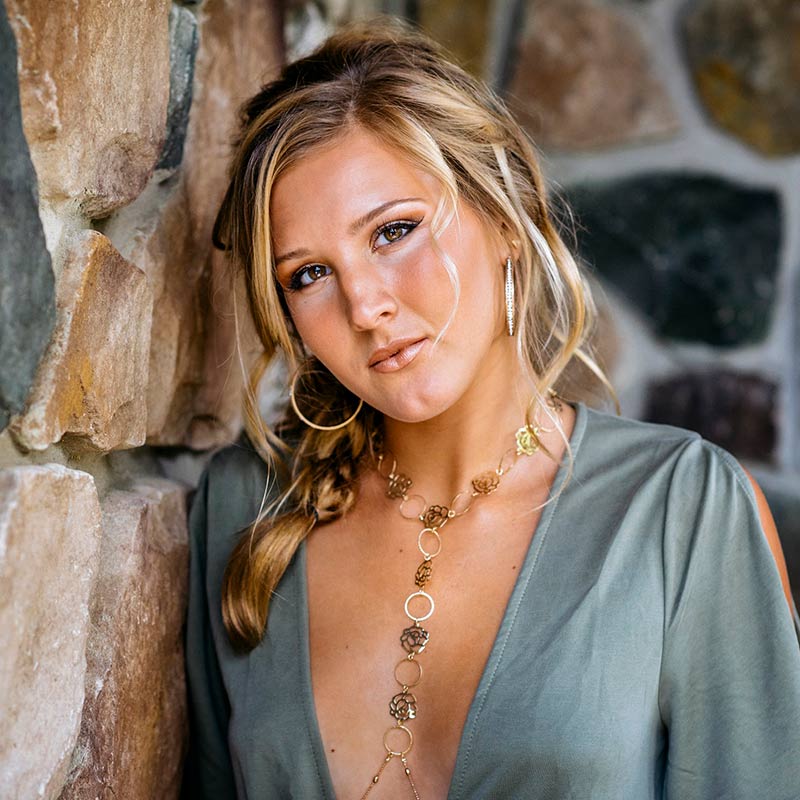 CC Miles, a small-town Jersey girl from Medford Lakes, is only 17 but already has talent, maturity, and grace beyond her years. With 2 EPs, and an album under her belt, a military base tour, and another full-length album on the way, CC is carving out quite the career as a singer-songwriter.

Being a teenager herself, CC’s music speaks directly to her target audience and to extend that relatability to her peers, she also vlogs regularly on her YouTube channel.

CC’s latest single, “The Lucky Ones” is a sentimental tune about young love and looking back on growing up. Check out the video below and read our interview with CC!

Can you tell us a little bit about yourself for people who don’t know you yet?

Yeah, I’m a singer-songwriter. I have two EPs out and my latest release, “The Lucky Ones” is my new single. And then I have an album, Almost, that I released last year. I’m a pop singer but I’m very lyric heavy so I like storytelling. So it’s kind of like pop storytelling songs.

I was listening to a lot of your music leading up to this interview. Then also on the way here. I really like your sound. It’s fun and real.

You draw a lot from your own life. I know that you have a song called “The Tendency” that was inspired by The Vampire Diaries, which is my favorite show.

Then you also wrote a song about Taylor Swift and you met her. Can you tell us about that experience?

I met her at the 1989 concert in 2015 so I was 13-years-old. And me and a few of my friends, we splatter-painted our entire bodies, like our faces and everything. We were covered in paint. We had a sign that said the rest of the world was black and white, but we were in screaming colors. So that’s one of her lyrics from her song “Out Of The Woods”. We were just dancing around in the stadium. In the middle of the concert, we looked down because we were standing on our chairs, and we looked down, and her mom was right in front of us! She was like, do you want to meet Taylor Swift? And we were like, Oh my God. We were crying. It was surreal. And then we got to meet her after the show and she was so amazing. She was so genuine. This was such an important part of my life because I had looked up to her for so long. She was such a role model for me and she inspired me to be a songwriter.

Did you tell her that?

I did tell her that because that was around the time that I released my first EP and I told her that I’ve just released that … she inspired me and everything. Then I actually wrote a song about that night and how much of an impact she’s had on me. That song is called “60,000 Dreams”.

Fast forward to 2019, you’ve released two songs this year. How would you say that the songs differ from your previous albums and singles?

So I would say that these songs are more … The lyrics definitely dive deeper. They’re more about my life and everything, especially “The Lucky Ones” because I wrote that about my hometown, Medford Lakes. Even the video is super real. I had a bunch of the kids that are growing up in the town right now in the video, so that was super fun and it was kind of like a whole town thing that got a lot of local press. It was pretty cool for everyone I think. And the, the video was just so real for me. I filmed it in the car that I actually drive and I filmed in my actual room. My mom was even in a part of it taking prom pictures of me, so, yeah.

Now, are you coming out with an album this year or is that gonna be in 2020?

Probably 2020. I’m definitely gonna release more music this year. I’m thinking one or two more singles. I’ve been writing so much and I’m definitely excited about what’s coming next.

So you’re touring Hawaii. Have you ever been to Hawaii before?

I have, but it was just a vacation and I was in Maui. The military base is on Oahu. This is a whole military base tour that I’ve been on this summer. It’s been great so far, so I’m excited about it.

What made you want to tour military bases and give back to those families?

Well, I didn’t even think about it before I heard about this tour. I didn’t think about the families and what they go through, like being on the base. They don’t have a lot of entertainment there and everything. I just thought, you know, this could be such a great opportunity to put on a show for them. They’ve been loving it. So it’s been great.

You also have a high school tour?

Yeah, so that’s going to be this fall out in LA. It’s a tour that’s been going on. They always have different artists on it. Okay. That’ll be cool because that’s definitely my target audience. High schools will be super fun.

You definitely have that Taylor Swift vibe where you’re you’re a teenage girl and you’re relating to others with your music.

Absolutely. And I want them to dream bigger I guess. And it’s good for people to see like … I grew up in a town where people motivated each other. It’s a very nice vibe to be surrounded by. So I think the more I can spread that the better.

Yeah, definitely. We need more of that in this world for sure. Do you have anything else you want to tell us about that you have coming up?

I’m always updating about everything that’s going on my YouTube channel. I do a lot of vlogs and also my Instagram, Twitter, Facebook. So if you ever want to hear anything or if you ever want to know what new music is coming out or a new tour or something, I’m always posting about it. I’m going to Nashville soon and hopefully going to do some co-writing sessions and maybe something will come out of that. And I’m also going to be playing with the Wes Cook Band there. I met them on the military tour and they’re super fun. I actually spontaneously played a song with them on one of the dates. I just went up and I sang “Jolene” and that was fun. So they actually invited me to come to Nashville and play a few of their shows with them.

Is there anything you’d like to say to your fans and your future fans out there?

I really think that everyone should embrace their creativity and I was always surrounded by my family. They’re so supportive of me and everything. I know I’m so lucky to have that. So just surrounding yourself with the right people is super important because I think that this world … I think that the more creativity that we all have … I hope we go through another like Renaissance the machines will take over mundane jobs that require no creativity and then suddenly everyone will be so creative and it will be super, super cool. That’s like a dream that I’ve always had.

Steve Durland Talks Becoming a Filmmaker and “The CONsequence”