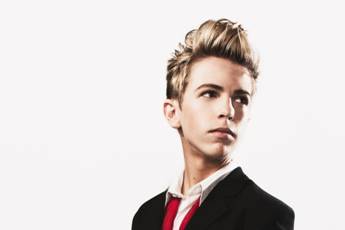 Teen sensation, Dylan Hyde is not your normal 15-year-old.  While he loves skateboarding, he doesn’t sport the shaggy hair and baggy clothes to go with it.  Dylan prefers bow ties, blazers and a funky flipped-up hairdo.  His music is more crooner than punk kid and he’s a self-admitted romantic.  Dylan currently has an album in the works and a web series on YouTube.  I Skyped the incredibly sweet and adorable Mr. Hyde.  This was my first time doing a Skype interview, so I apologize for any poor sound quality or weird facial expressions in advance! 🙂  Watch, enjoy and leave comments!