The award is named for Joseph Lafferty who passed away earlier this year. He was a two-time transplant recipient, author, and national organ donation advocate who helped reboot the Donate Life Hollywood project in 2018.

DLH Founder, Tenaya Wallace says each year the award will honor an individual who works in the entertainment industry and helps to promote organ, eye, and tissue donation. “The entertainment industry has a huge impact on the public’s perception of organ donation, and we are thrilled to honor these exceptional storylines for their dedication to getting the story right,” said Wallace. “Unlike most other subjects that are dramatized in Hollywood, the majority of the public has never actually experienced donation and thus are highly influenced, positively or negatively, by the fictional account of a very real and serious topic. When Hollywood gets it wrong, it can cost lives. But when they get it right—as these productions have—Hollywood has the power to literally save and change lives.”

See below for full details about the honorees:

■ Daniel Sinclair, a co-executive producer on “Chicago Med” will receive an Inspire Award for his writing of the episode of “When You’re a Hammer, Everything’s a Nail.” This episode features a DCD donation, which is the first time we have seen this in a storyline. It also showed the efforts a hospital makes to identify a next of kin when there is a John Doe and clearly highlights the vast separation between the transplant unit and the emergency department.

■ Joy Blake is being honored for the writing of the episode “The Long and Winding Road” for the television program “The Resident.” DLH considers this to be the best episode ever written about organ donation. It is heartfelt while also accurately explaining the donation process, including brain death testing. Also honored is Dr. Daniela Lamas, writer/producer and physician, who works with The Resident to assure the medical accuracy of storylines.

■ Emmy award-winning screenwriter Mark Driscoll, a co-executive producer on “Grey’s Anatomy” will receive an Inspire Award for his writing of the episode “Legacy.” This powerful episode highlighted the person behind the organ donation and created a beautiful tribute to the donor.

■ Creator and Executive Producers Shannon Powers and Dan Snook are being honored for “Last Chance Transplant,” a docuseries following the journey of people waiting for organ transplants at the Vanderbilt University Medical Center in Nashville, Tennessee. 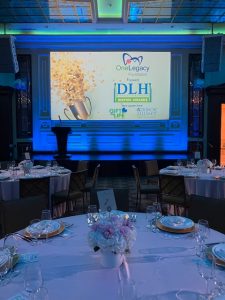 ■ Documentarian Colleen Wood is being honored for “JOE 238.” Ten years in the making, “JOE 238” documents the death of 24-year-old Sacramento police officer Joseph “Joe” Chairez, who wished to donate his organs upon death, and follows the lives of his loved ones in their unique grieving process as a donor family.

Learn more about the wonderful work OneLegacy does at OneLegacy.org