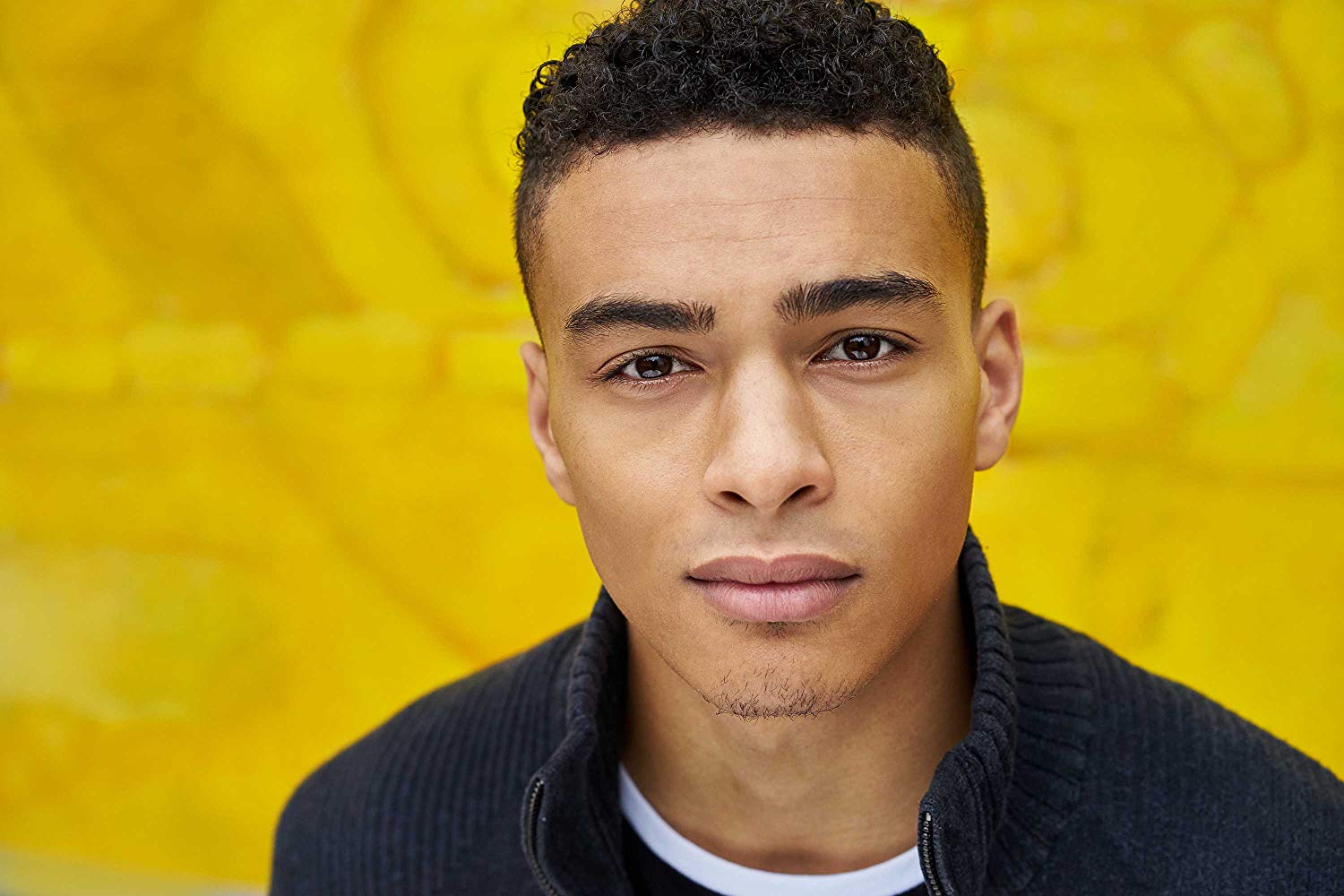 Fresh-faced and with a blossoming career, Gabriel Darku is already a familiar face on television. Slasher fans will recall him from his pivotal role in season 3. [Spoiler ahead if you haven’t watched yet!] Gabriel’s other credits include American Gods, Impulse, Private Eyes, and Shadowhunters: The Mortal Instruments.

Now Gabriel is starring in Netflix’s upcoming sci-fi drama October Faction premiering on January 23, 2020. October Faction based on a graphic novel by Steve Niles and Damien Worm and follows a retired monster hunter and his family. The series is said to be Men In Black meets Riverdale as monsters and humans collide in the same world.

Gabriel Darku plays Geoff Allen, the son of the monster hunter. Get to know more about Gabriel and October Faction in our interview with him!

Tell us about your big break. What got you into acting?

I was working for McDonald’s in high school and it was the summer of 2012 … They were holding this contest, I guess you could say, to hire their own employees into the next commercial spot rather than actors. I decided to enter into this contest not really thinking much of it and I made it through the shortlist round and then to the live audition. They flew us up to Toronto to do the live audition and then I ended up making it into the commercial.

That whole experience of getting to do that, rehearsals, and then spending this big thirteen-and-a-half-hour day to shoot this little thirty-second commercial … It just got the gears grinding in my head. If there was something I would choose as a career for thirteen hours every day, this is totally it … Being in front of the camera. That sort of spiked the interest for me and then I finished my last year of high school and decided to audition for the Toronto Film School and the rest is history.

What I would consider being a break in my career was my first lead role in Reboot: The Guardian Code. It’s sort of a reboot of an old ‘90s cartoon that was a cult classic here in Canada – the first CGI show. So that was my first big role in the industry and where I had my first experience working full time on a set.

What is your favorite part of the acting process?

My favorite part of the acting process is definitely filming. As much as I love all of the prepping and everything, to an extent, the way I function is very much trying to focus on discoveries in the moment. The TV process is so quick that most of that really happens all on set when I’m performing scenes with my co-stars for the first time and getting to work with these amazing actors that give you so much to work off of. Making all of these discoveries with them is definitely one of my favorite parts of the process.

Did you ever have an audition that just went terribly wrong?

I can’t think of any off the top of my head that I can pinpoint. I’ve definitely walked out of audition rooms going, “Oh crap, that didn’t exactly go how I planned”. [laughs] It happens, but it’s funny because a lot of the times where you leave an audition room going, “oh man, I knocked it out of the park”, you won’t hear back.

But then you leave an audition thinking, “wow, I’m definitely not going to hear back from them”, and then you do end up getting a callback or even booking the role. It’s funny. I sort of learned to walk out of the audition and just let it go and try not to let it get to my head too much. It can really affect an actor, getting in your head about auditions and stuff. At the end of the day, you can’t control how they perceived you, you know?

Right. You never know what their vision for the role is.

Exactly. There is no wrong decision. With that being said, there’s definitely been times where I’ve walked out and gone, “yeesh.” [laughs]

What was the experience of working on Slasher like?

Slasher was amazing! I, myself, am a big horror fan. I love horror and scary shows. It has always been a dream of mine to be part of a project that has that theme around it. Not only that but getting to actually play the killer of the series was such a huge deal for me. I didn’t actually know that was my role until getting into the costume fitting and they told me I was going to try on the druid outfit as well, and it was a huge surprise and it just felt great.

Getting to play a character with that many facets on a set that just has that kind of theme is really cool. The effects that went into it and spending the entire day filming covered in blood was just like a whole different, surreal experience. I really loved it. Working with the director, Adam MacDonald, on that project as well – He was just incredible. To this day, that’s definitely one of my favorite jobs.

Now you said you’re a fan of horror. What is your favorite horror movie of all time?

That’s really hard. I love The Conjuring series. The Conjuring 2 is an incredible movie. I also have a soft spot for this old classic called The Event Horizon. My dad watched this movie with me when I was a kid – scared the crap out of me! To this day I still love watching it. Some people might consider it to be a little outdated and not scary, but I still love watching it. 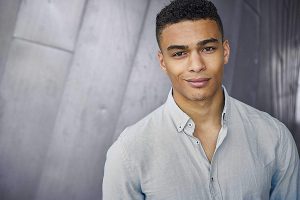 Next up, you have an exciting series on Netflix. Tell us about October Faction!

This is going to be a big one! It’s a really great, fun story about this family of monster hunters based on a graphic novel by the same name. I play Geoff Allen, the twin brother to Viv Allen, son of Deloris and Fred. It’s a very quirky tale that focuses a lot on family and communication and harboring secrets. It’s just a really cool sci-fi drama that has really good topics based on a lot of what we’re seeing here in the real world today. I think it’s going to be a really fun ride for a lot of people.

What can you tell us about your character, Geoff Allen?

He’s a very smart, confident, charismatic individual. All of these are sort of facets he uses to keep the world at bay. He is very forward and isn’t afraid to speak his mind. He isn’t afraid to call people out on things that he thinks are wrong and against his virtues. At the same time, he also struggles a lot with finding a place to fit in and wanting to be accepted. He goes through a lot of hard things to process in the series as secrets come out. He and Viv go through their own really intense journey separate from their parents and it’s going to be really interesting to watch.

Since October Faction was a book first, there’s already a hype around it. You have that built-in devoted fan base, which is kind of scary if you’re portraying a character that people love.

Yeah, it can be, but it’s kind of cool that we get to take this really great material and develop it for a different medium and for a wider audience. The novels have an aesthetic appeal, but I love that the show is trying to dive deeper into the topics and themes and the dialogue that are present in the story. I think it’s going to be great to open that up and explore that much further.

You mentioned you have a twin sister on the show. Did you and Aurora Burghart, who plays Viv, develop a twin connection on and off set?

We actually connected really well both on set and off set. Aurora has a great energy about her and we actually … other actors probably experienced it as well, but the more time we spent together on set, the more we started to notice how much more we had in common with our characters than we thought we did. And we only saw each other as Geoff and Viv – between takes, on and off camera. So, it was really easy and really great to get to bond with her and get to know her. I think the chemistry on set – not just for me and Aurora – but for our parents, Tamara Taylor and J.C. MacKenzie, as well. All of the chemistry amongst the cast is incredible. It was very easy to get along with them.

Without giving too much away, can you share a favorite scene from October Faction with us?

There is this one scene that I love between Geoff and Phillip (Praneet Akilla) that happens on the rooftop of the Allen mansion in episode 4. It’s a great scene where we sort of get to see them… I’m going to say bond for the first time, but it’s a little more complicated than that. You’ll understand when you see it. I love the scene. The dialogue was great. The performances were great. It’s just a very emotional, gripping scene.

If you could choose any supernatural being that you were either blessed or cursed with being, which one would you choose?

I would probably pick warlock. Anytime that I’m playing a fantasy game or video game of some kind, if I have an option to play some type of spellcaster, that’s probably what I’m going to choose. You’re not just stuck with one ability. You have an entire spellbook of abilities you can tap into. I love it.