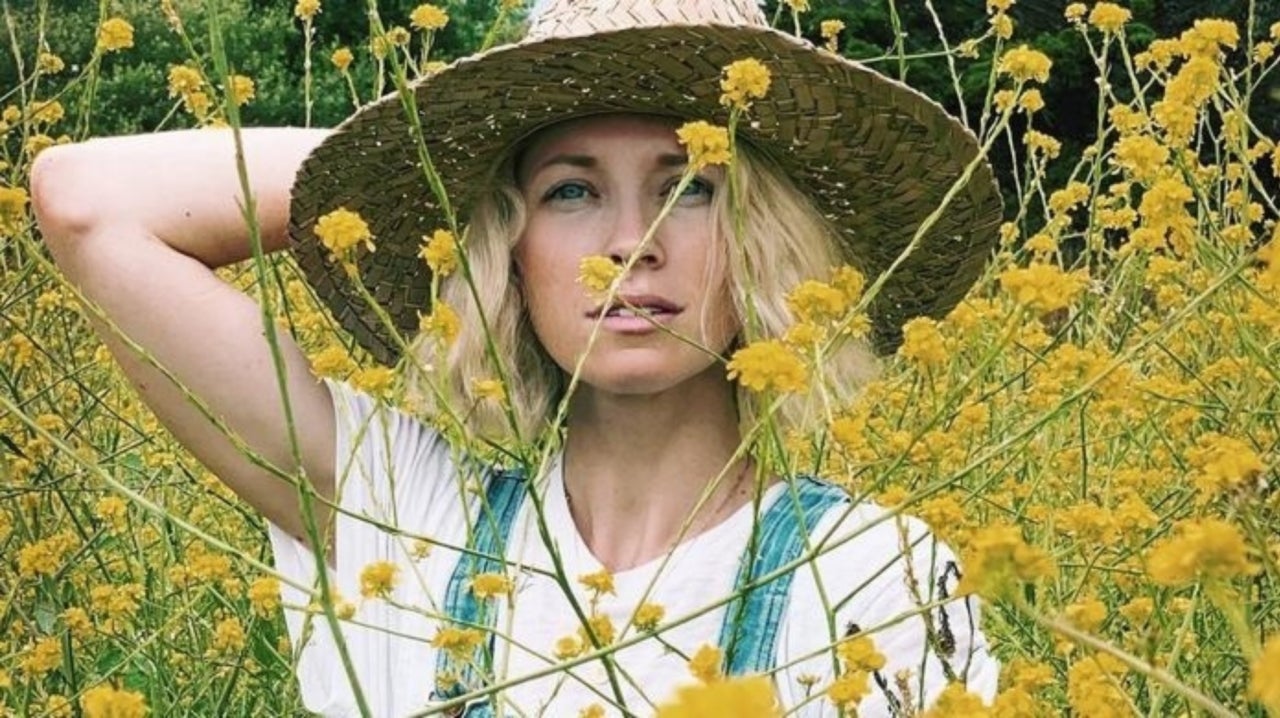 “I always told myself I’d get to Nashville,” Brooke White sings on the eponymous track off her upcoming album, Calico. The former American Idol alum had dreamed of moving to Nashville her entire career to make a “real” country album, but life had other plans. Those plans included becoming the mother of two, starting her own web series, The Girls With Glasses. It was through this journey, along with a little bit of opportunity coming her way, that Brooke embraced her Cali lifestyle and incorporated it into her music.

While most country records, and even many pop albums, are made in Nashville, Brooke White, along with producers, Eric Straube and Chris Qualls, managed to create a country-western album that beautifully infuses pop, disco, and rock to represent that California country now defined by Brooke White on Calico.

The album comes out on October 4th and features 12-tracks of pure catchy hits that will appeal to both country and pop fans.

Recently, I chatted with Brooke about Calico, which she gushed about with enthusiasm. Check it out below and listen to our Featured Artist: Brooke White Playlist on Spotify!

StarShine Magazine: I love your music! I’ve been listening to “Into The Trees” a lot.

SSM: The video has such a feel-good, natural, easy-breezy kind of vibe going on.

Brooke: Good! I’m so glad you feel it. That’s exactly what I hoped for.

SSM: So in the video, that’s your real-life husband.

Brooke: Thank you! He did a great job. It is so not his thing being on camera. It’s just like you know … We’re very opposite in many ways but complementary and supportive of each other. He’s always been supportive of what I’m doing as long as he kind of just doesn’t get roped in … [laughs] And I roped him in this time. I had actually already filmed the music video with just me singing and looking at the footage and trying to piece it together because I actually edited it. I was like this is just not speaking. It’s just falling flat and we need to put love in this. So I said “hey, look I need you to be in this. Will you just do this one time for me?” He was reluctant but when it was time, he was just on board. He was always like “what do I do?” And I was like “Just be normal. You don’t even have to act. Just be yourself.” When you put something in slow motion it really just like … gives you that feeling and just watching it … You know we’ve been married for 15 and a half years …

Brooke: Yeah, I know! It’s so crazy! How am I even old enough to be married for 15 and a half years? [laughs] I was young … I was super young when I got married … It was really quite sweet and nice to watch that video back and see the footage. It actually put a tear in my eye.

SSM: That’s really sweet! And that’s something you’ll have for the rest of your lives.

Brooke: I know. I’m so glad he did it and I think he’s actually fairly glad with it too.

SSM: So your first single  off the album is “Calico” and the album is called Calico. Now explain to us what Calico, California country, is exactly.

Brooke: This country record was something that I knew I would make for a long time. As a matter of fact, I had started the process getting on the country road back in 2010 after High Hopes & Heartbreak.  I wanted to make kind of a classic singer-songwriter record, which totally has you know Americana/Country tones in it. I grew up listening to both. I would take little trips to Nashville. I’ve been living in L.A. for 16 years now. I started co-writing and within the year I probably had a stack of almost 20 potential country songs. But I didn’t know if I was really resonating with them as a collective body of work. I was under the impression that if I wanted to really go at this country thing that I needed to live in Nashville because that is where country records are made.

At the time my husband had a job here in L.A.  I thought I was going to uproot or go back and forth so my husband could stay here and work. In this process, I met Jack Matranga, who I then started writing with. We had this instantaneous musical chemistry so we created this little side project called Jack and White, which was kind of like an indie folk/rock/pop duo. I decided to put country on the back burner.

Then I got pregnant with London. [Laughs] And I became a mom and that really changes everything. There was just no up picking up and going to Nashville at that point.  From 2014 to 2017, I hadn’t done anything musically. Christmas 2017, my husband said, “For Christmas this year, I want you to make a record and I feel like as a family we just got to come together and make this happen.” Which was very kind and very supportive because it takes an enormous sacrifice to make each record … and what it takes financially because it’s going to be an independent effort … It was such a big undertaking. Meanwhile, London was in kindergarten and I was walking her to school every day and I had Sunny, who I was still nursing so I was like, “okay, yeah, this will work”. [Laughs] After figuring out the budget and how much I’d have to be gone … I was just like this is not gonna happen and I was really bummed. I really had this in my head for so long and it has to happen in Nashville.

Then I got this call from these two producers that have worked with Jack, Eric Straube and Chris Qualls. They were in Echo Park, which is a heck of a lot closer than Nashville. They’re really exceptional writers and producers, but more pop guys. We wanted to try to do something a little different and challenging and more stretching for all of us. So the fact that none of us ever sought out to make a country record before made it an interesting challenge.

I spent the entire year of 2018 making, what turned out to be, Calico which is a truncated word for California country because we made a country record in California. It doesn’t mean that there’s nothing that represents the Nashville country sound … I think it definitely does, but we brought in some of the California feel, you know, that palm tree sunshine vibe. This is literally the wild west. There aren’t any rules when it comes to creating something here. You really can try anything and it’s all open. That is what led us to Calico. I’m really thankful things worked out the way they did because I couldn’t make Calico in Nashville.

SSM: So the album comes out on October 4th, what can you tell us about some of the other songs on it?

Brooke: This is the most upbeat record that I’ve made. Like “High Hopes & Heartbreak” and it was a disco song. It was a really fun, quirky song … and we kind of carried over a little bit of that with a disco-country hybrid. I have a couple of songs that are just straight up, super fun dancey songs. Some of the album is autobiographically based. Some are story songs or fun songs that are inspired by a certain feeling. There’s diversity on it, but it’s just exciting to create something that’s just so upbeat, so fun.

As a singer-songwriter, you often get into more of the melancholy and while there are moments of this … I talk about anxiety, which is something I had to face throughout my life. Part of the human experience is to experience anxiety and fear. For me, the whole point is to talk about it in terms of a relationship … like breaking up with it. You held me down and I’m breaking up with you. So I really liked that song from a narrative standpoint.

There’s a good chunk of love songs as there always should be. I just think this record has a lightness. It has an upbeat quality and a modern, just fun feel. On every song, we set out to write a strong hook and I think we did. I think we accomplished that. I think there’s a little something for everyone, but the record as a whole, I’m just really proud of how it came together and excited to have something that’s just so fun and joyful out there.

SSM: What would you like to say to all of your fans out there?

Brooke: To everyone who’s been along with me since “American Idol”. That was a long time ago and there was no Instagram and I had to go back out and find people all over again … I’ve been very lucky and fortunate to have connected with such amazing people who’ve just been there with me since the beginning. Thank you for the support and for listening. I just have to say thank you and I really hope that this record is something that they can enjoy.

Keep up with Brooke White

Jackson Rathbone Talks ‘Do Not Reply’, Music, and More!