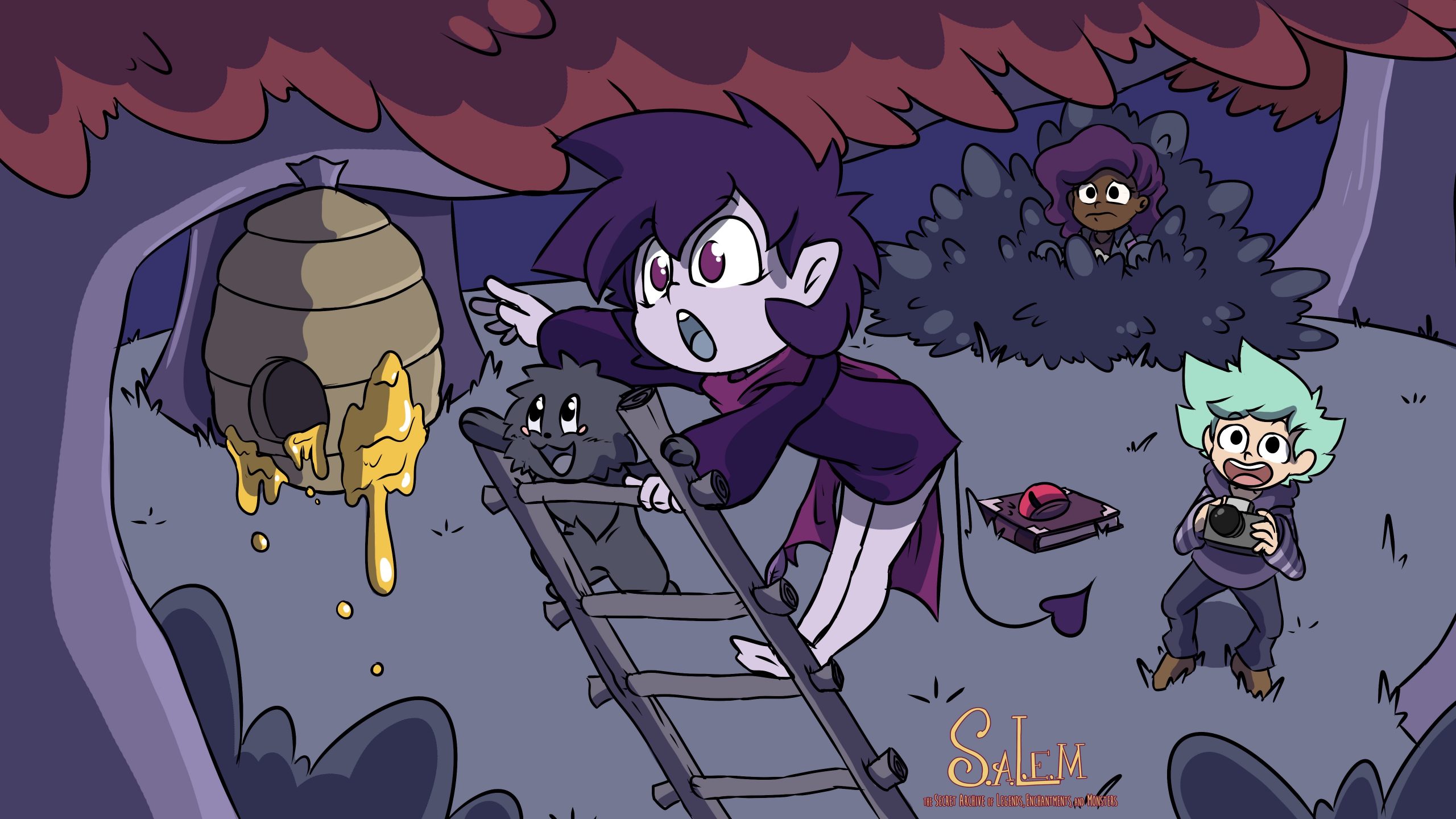 Comic artist and visual designer Sam Sawyer is the creator of SALEM: The Secret Archive of Legends, Entertainments, and Monsters. Sam funded the project through Kickstarter and has surpassed her goal. Along with being the creator of the animated series, Sam also designs tarot card decks, is a comic book artist, published author, and recently was an artistic collaborator on Lindsey Stirling’s music video for “The Upside”. Find out more about Sam and her interesting journey that does not involve any art classes!

Hi Sam! Congratulations on your upcoming series. Tell us about SALEM.

The story follows a confused cryptid named Salem. Growing up believing they were a boogeyman, like their dad, their world is turned upside down when they find out they’re adopted. Wishing to discover their origin, Salem sets off with an enchanted book to discover their true self. A wanna-be cryptid photographer named Oliver and Petra, a physic medium terrified of ghosts, join Salem. With magical aid and plenty of energy drinks, the trio set off on a monster hunt. The book they travel with contains the secrets of cryptids and legends such as The Flatwoods Monster, Mothman, Nightwalkers, and other great North American mythical creatures. By using the book they are able to categorize the different cryptids to discover what Salem truly is.

With Salem being non-binary, was it important for you to represent non-binary people and something you sought out? Or did the character just naturally speak to you in that way?

Being inclusive has always been very important to me. Salem’s character began to develop naturally and soon became obvious that they were simply meant to be non-binary. I try to let the characters speak for themselves as I create them.

When did you start creating comics?

I began creating comics when I was very young. I always had a fascination with drawing and telling stories. I have drawings that date back to elementary school! I wanted to tell stories and comics were a great way for me to get started.

How did you go about getting SALEM out into the world?

I started out by turning SALEM into a comic but never made it into the world. I would get a few chapters in but trash it as my self-confidence was never that great. Eventually, I decided SALEM would be a great animated series. I began collecting the art and designing the world, the characters, etc. I met Randy Abrams, my executive producer, and he helped me get organized and we began creating SALEM as a series.

What was the first comic you ever read?

The first comic book series I read was Sonic the Hedgehog comics in middle school.

You’re also a comic book cover artist. How did you get into that?

I started going to different comic conventions and meeting people. I would sell my art at the shows. When I got my first comic cover job, I felt more confident and began to seek out other opportunities.

Did you take a ton of art and design classes?

No, I was in one art class in middle school and I hated it. They were extremely hard on me and it was difficult for me to get a passing grade. I never took another art class again!

Recently, you worked on Lindsey Stirling’s music video. What was that experience like?

It was great, a ton of work but well worth it. I had to do 13 illustrations that tested my abilities as an artist. Working with someone who I really look up to was amazing. I can’t wait to see the final music video!

Any other projects coming up that you can share with our readers?

I just recently created a new tarot deck called ‘The Reigning Rouge Tarot’ and it’s finally up on my Etsy shop. I adore creating tarot decks and hope to create more in the future. I also want to finish a novel I started a year ago.

What advice do you have for fellow artists and comic creators?

The beginning is rough and difficult until you get your foot in the door and get your name out there. Social media has changed the game, and if you don’t have a large amount of followers, people won’t take you seriously. However, social media numbers don’t equal talent so don’t compare yourself to others who have a large number of followers.