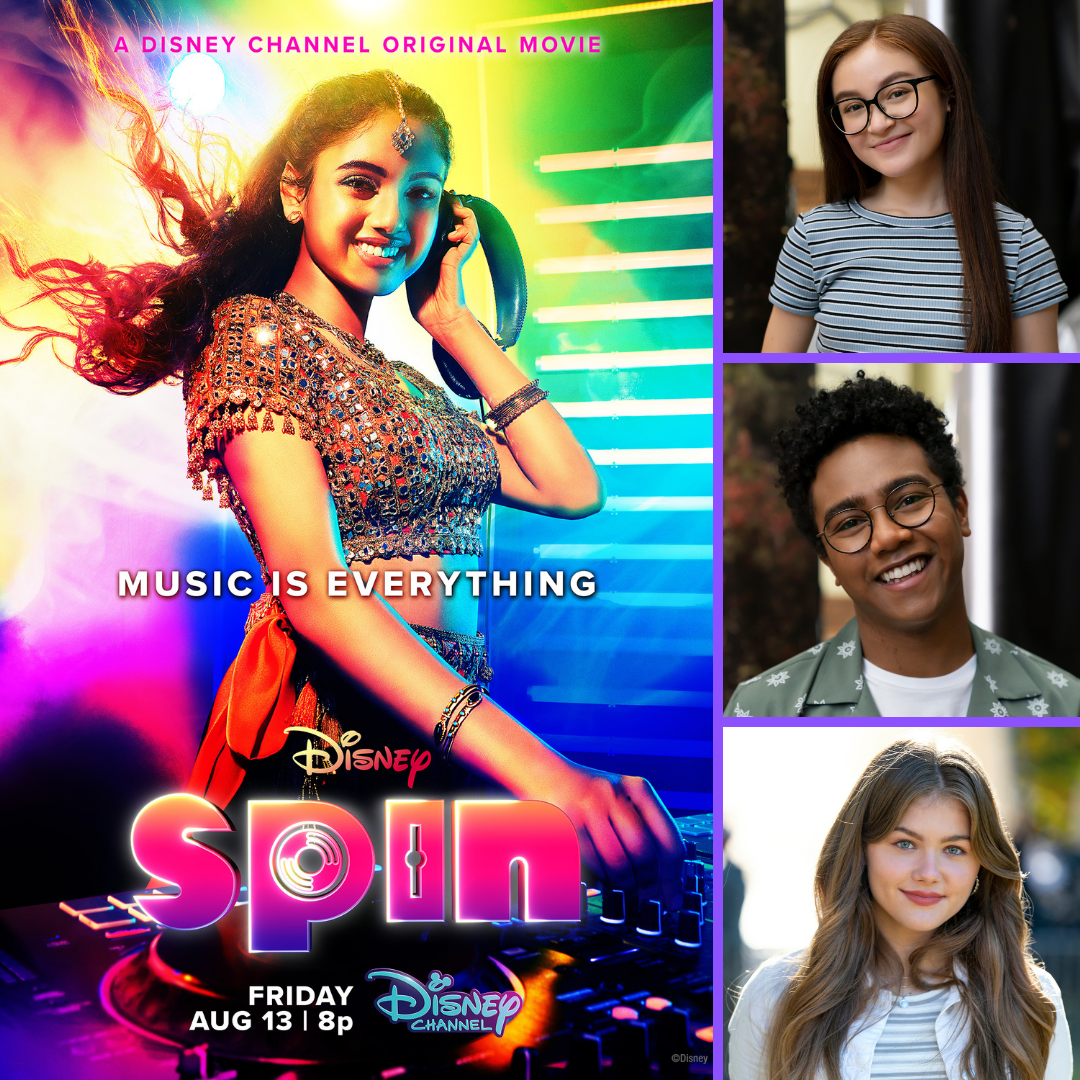 The new Disney Channel Original Movie Spin comes out this Friday, August 13th, and StarShine caught up with three of the film’s stars to get the details!

Directed by Manjari Makijany, Spin follows Rhea (played by Avantika), an Indian American teen who works in her family’s restaurant and has a love for making music playlists. After meeting aspiring DJ Max, Rhea discovers her talent for creating beats and producing music. Her passion awakens in her and she goes on a journey of self-discovery and staying true to herself. Rhea is surrounded by a tight-knit family, which includes her father Arvind (Abhay Deol), little brother Rohan (Aryan Simhadri), and grandmother Asha (Meera Syal). A big part of the film is also Rhea’s eclectic group of friends, Molly (Anna Cathcart), Watson (Jahbril Cook), and Ginger (Kerri Medders).

We caught up with Rhea’s cast of best friends to discuss the supportive friendships and positive messages displayed in Spin. “I think viewers are going to get inspired by Rhea’s journey of self-discovery,” shared Kerri Medders, who is best known for her role in Netflix’s Alexa & Katie and plays social media influencer Ginger in Spin. “When you have that support system, that’s shown in the film, anything is possible.”

“I hope people come away from it inspired to try a new skill or take up a new hobby,” Jahbril Cook offered. He also said he loved playing a character like Watson. “I think it’s rare to see a high school student so confident. Watson is very self-assured and unafraid. He’s never trying to impress somebody. He just likes what he likes. That’s some role model stuff.”

In fact, Watson isn’t the only character in Spin that is role model-worthy. The film’s writers Carley Steiner and Josh Cagan have done an excellent job of breaking movie clique cliches. The characters they’ve created show a groundedness that isn’t commonly seen in programming for teens and tweens.

When StarShine asked about their favorite scenes, the gorgeous Festival of Colors scene was an obvious favorite, but Anna Cathcart (best known from Disney’s Descendants franchise and Netflix’s To All Of The Boys I Loved) added that anytime the cast was all together, it was special. “When the whole group of friends were all in one place and we could feed off each other’s energy and improv and have little moments that were so perfect for us and our characters, those were just the funnest [sic] times for sure,” Anna says.

Spin premieres on Friday, August 13th at 8 pm PT/ET on the Disney Channel. Keep scrolling to watch our full interview with Anna, Kerri, and Jahbril on YouTube or listen to it on the go on our podcast!

Listen to the interview on the StarShine Magazine Podcast!