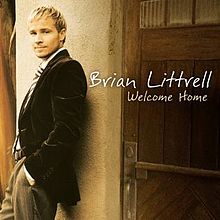 Welcome Home is the debut solo project from Backstreet Boy, Brian Littrell. Unlike his bandmate, Nick Carter, who merged onto the rock/pop scene in 2002, Littrell’s roots stem as far back as to when he was five-years-old. Growing up Christian and diagnosed with a heart condition, Littrell counted his blessings and ministered his beliefs through music, mostly singing in the choir. Prior to joining the Backstreet Boys, Littrell had planned on attending a Bible college to study youth or music ministry. God obviously had a different plan for him. “God has allowed me through the Backstreet Boys to minister in a positive way, encouraging people to stand up for what they believe,” Littrell explains.

Now Brian Littrell is getting the chance to minister even more with Welcome Home. “These songs represent who I am and what I believe. It’s no secret: What you see is what you get, and I couldn’t be more proud to have the opportunity to share this music, both with the church and with longtime Backstreet fans alike,” Littrell says. The 11 tracks are centered around God and how grateful Littrell is for the life he was given. Don’t expect the typical sounds of the gospel on this album, however. Littrell offers a modern spin on Christian music with pop infectious hooks and beautiful melodies.

Songs like “My Answer Is You”, “I’m Alive” and the first single “Welcome Home” will have you singing along and bopping your head to the beat. “Wish” and “Over My Head” discuss the wonder and mystery of God, while “You Keep Givin’ Me” and “We Lift You Up” expresses the love one can have for Him. “Gone Without Goodbye”, a song about loss and “Grace of My Life”, which is about Littrell’s thanks to the Lord for his wife will both have you in tears. “Angels and Heroes” is one of Littrell’s favorites on the album. The song is an inspiration stating, “We don’t need wings to be angels. We don’t need reasons to be right. Your love makes us all better. That’s who we really are. Angels and heroes at heart.” Ending the album in both true vocalist and gospel fashion, Littrell sings “Jesus Love You” a cappella, with his three-year-old son, Baylee introducing the track and ending it.

Welcome Home is such an uplifting album that renews your faith and gives you something to look forward to. Brian Littrell sounds like an angel and plays the part of one as well with this album. It’s no wonder Littrell already won a Dove Award for Inspirational Song of the Year with his rendition of “In Christ Alone”. StarShine urges you to pick up a copy of Welcome Home, if not for the messages expressed on the album, then for the rich music of it. To sample songs and find out more about Brian Littrell, go to brianlittrell.com.