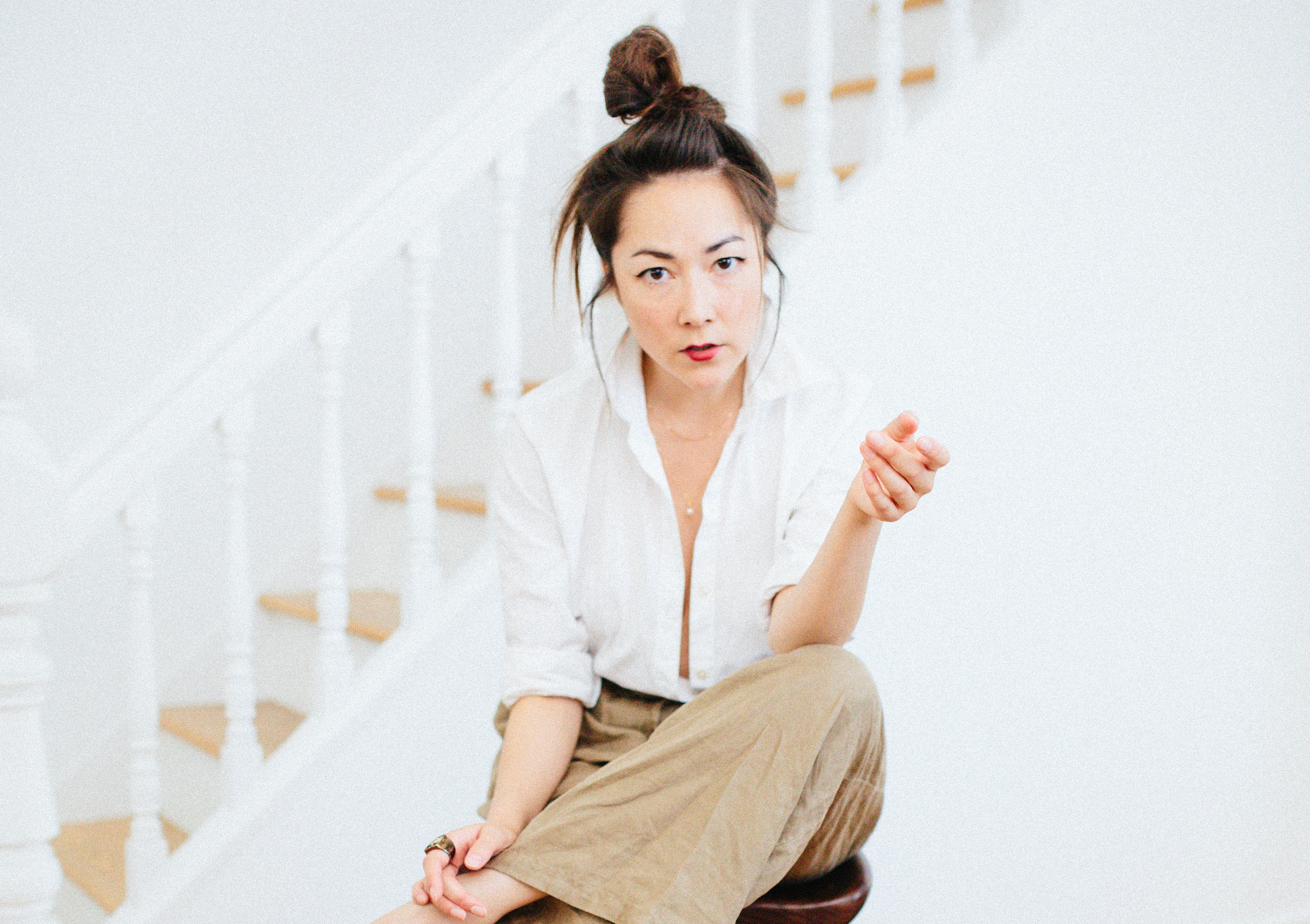 Canadian actress Emily Piggford is the star of CW Seed series, Warigami. Emily plays Wendy Ohata, who recently found out she’s a descendant of an ancient Japanese people who can turn paper into deadly weapons.

Emily’s other credits include The Umbrella Academy and Flatliners. Currently, Emily is filming in New Zealand for the new CBC series, The Sounds.  We can’t wait to see what other roles this blossoming star throws herself into! Recently, we sent some questions to Emily and her responses show how much she truly enjoys her craft and appreciates the world around her.

Hi Emily, thank you so much for taking the time to answer some questions for StarShine! What can you tell us about your role in Warigami?

Thank you for having me! I play Wendy Ohata, a fierce young woman who discovers she has a twin brother and that together they possess the power to manipulate the density of paper with a touch, essentially able to weaponize it. Wendy is goal-oriented, with honor and excellence in mind. Her singular focus can make her a bit intense or annoying to those around her, but she hardly seems to mind, which is one of the things I love about her – she’s unapologetically herself and very brave.

When you first received the pitch for Warigami, what were your thoughts?

I wanted to do it so badly! Not only was I excited to see how the “origami powers” would be executed in the story and onscreen, but I was so thrilled to see a mainstream North American story based on new Japanese superheroes. I was really eager to train physically to meet the demands of the role, as Wendy is a skilled martial artist. And also I loved the thought of getting to spend time with whoever else was cast, particularly the actors who would be playing Wendy’s twin brother, Vincent, his best friend Mark, and Wendy’s nemesis, Sadako. I was excited for that community onscreen and behind the scenes in this fantastic world of action and comedy and to work with so many other actors of Asian and specifically Japanese descent.

When can us American fans see more of the series?

All of season one is out now on CW Seed, free to stream, runtime about the length of a feature film – and I would recommend watching it all through like that if you can, it’s really fun that way! As far as a second season goes, hopefully we’ll have enough views, positive feedback and support to get a green light to make more for you! There are definitely big plans for where the story and the characters would go, so fingers crossed.

Did you get to learn a lot of cool martial arts for Warigami? Your co-star Kai Bradbury raved that the girls got the coolest fight scenes in our interview with him.

I saw that haha! Oh, I love Kai. Yeah, we had a ton of fun! I was over the moon when I learned that Wendy and Sadako (played by the truly wonderful Miho Suzuki) would have a katana fight. I have a background in dance and some previous experience with dramatic combat (hand-to-hand, sword, rapier-dagger), but Wendy had been training in martial arts for at least two years when we meet her in season one. I was working on another project just before Warigami which left me with about two weeks before our first rehearsal to start training in Taekwondo.

Our stunt coordinator, Master Chang, gave Kai, Miho and I access to his Taekwondo academy, Black Belt World, to drop in and train whenever we could, which was amazing. I really loved it and only wish I had started earlier, like years earlier haha!– On one hand, to be at the level Wendy would be at, but also because I just enjoyed it so much!

Miho also has a background in dance and rhythmic gymnastics, Kai has a background in dance as well, so rehearsing and performing the fights with them felt very comfortable and fun. We were working with an incredible team of stunt performers and our doubles as well. Shoutout to my Wendy doubles, Melanie Phan and Tsu-Ching Yu who were so patient, so inspiring to watch and learn from, and helped Wendy be the badass you see on screen.

What can you tell us about your upcoming series The Sounds on CBC?

It’s a psychological thriller shot and set in New Zealand, written by Sarah-Kate Lynch and directed by Peter Stebbings. (Who are both wonderful. It’s a spoil of riches with this team.) It centers around Maggie Cabbott (Rachelle Lefevre) as she deals with the fallout when her husband Tom (Matt Whelan) goes missing, leaving more loose ends than just the fishery he was setting up in the Marlborough Sounds. Everyone in the town gets tangled in the web and my character is sent by Tom’s family to try and get to the bottom of things.

Out of all of your roles, which one was your favorite?

And which one was your most challenging?

The role I’m working on right now, Esther Ishikawa in The Sounds. I really love her and getting to establish her further in the range of circumstances she finds herself in. Esther is a rich character with a lot going on beneath a rather inscrutable exterior. Finding that balance has been challenging and really delightful work for me.

Any other upcoming projects you can share with us?

Yes, New Eden! So far I know it’ll be available on Crave later this year. I auditioned for about four different roles and each time I got to read more of the hilarious scripts and marvel at how clever and honestly low-key profound they were, this whole project is, I think. I’m grateful they kept calling me back til we found a role that was a good fit for everyone, and by that time I was a super fan! It’s a mockumentary comedic series about an all-female cult in Canada in the 1970s. Things go sideways and the show takes place between the time when the cult was active, to the “present” in the 90s, while jail time is being served by some and others are reliving the highs and lows of their time at New Eden. It’s co-created/co-written by and co-starring Kayla Lorette and Evany Rosen, directed by Aleysa Young. It was one of my favorite and most supportive on-set experiences and I had so much fun with my character.

When you’re not acting and kicking butt on screen, what do you like to do in your spare time?

I’m a pretty chill fish, a cozy home bunny, a long, whimsical walker… I listen to music, get groceries, make food, catch up with friends, watch all the things, catch up on chores and “correspondence” – as I call all my emails, DMs, social media, etc. Whenever I leave the house I try and visit someplace new, whether it’s walking a different route or checking out a business I’ve been recommended or have been curious about. And I genuinely enjoy doing the research, reflection, and work to try and better understand and take care of myself as well as be a more respectful, supportive, active human in the world, ha! I’m just over here enjoying being a human.

Have you had any star-struck moments so far in your career?

Oh I’m such a fangirl generally so I’m pretty frequently star-struck by the awesome people I have gotten to work with or be in the same room as: Famke Jansen, Lili Taylor, Ellen Page, Anna Friel, Diego Luna, Robert Sheehan, standing very near Catherine O’Hara at the Canadian Screen Awards, Jay Baruchel walked by later that night, Hannah Gadsby at a live reading of Casablanca, Margaret Atwood at Fan Expo for the launch of her graphic novel, Angel Catbird (I definitely choked when she made eye contact with me before signing my copy.) This year I came face-to-face with KJ Apa with some of the Riverdale cast nearby at the Teen Vogue party, that was cool haha!

If you could remake one movie and star in your dream role, which movie and role would you choose?

If we’re talking parallel-universe, carte-blanche remakes where the original never existed, that’s one thing… Because some of my favorite roles and movies are so iconic as they are, I’d feel almost rude redoing them! But if I could have originated Trinity in The Matrix, Leeloo in The Fifth Element, Velma Kelly in Chicago (and, flipping gender, I’d love to be Neo and Wolverine!!)… But in this universe, I’d love to play Crysta in a live-action remake of Fern Gully.

Watch the trailer for Warigami!